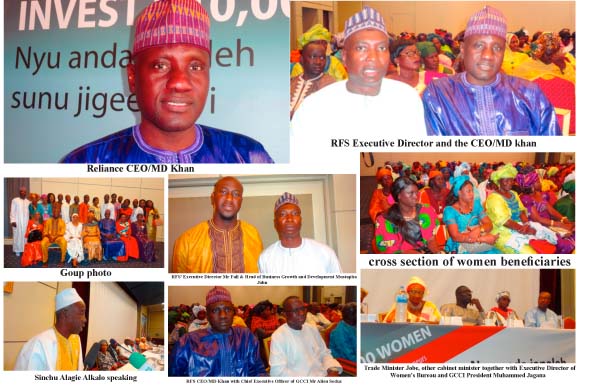 Reliance Financial Services (RFS), one of the leading microfinance institutions in The Gambia, Friday launched the Women Finance Deposit Programme.

The ceremony, held at the Kairaba Beach Hotel, was one of the series of events organised by Reliance Financial Service to celebrate International Women’s Day.

In her launching statement on behalf of the Vice President, the Executive Director of Women’s Bureau, Binta Sedibeh Jammeh, said Reliance’s intervention was timely, and in alignment with the strategic thinking and focus of the Government of The Gambia to achieve sustainable economic development as enshrined in the country’s Programme for Accelerated Growth and Employment and the country’s Vision 2016.

“I have been reliablyinformed that Reliance Financial Services’ Women Finance Programme is about providing access and is affordable to women entrepreneurs, with a special focus on rural women using the tried and tested innovativevillage banking programme pioneered by the Nobel Prize Winner Professor Mohammed Yunus.”

She added that the recently-concluded pilot project by Reliance Financial Services provided seed capital to 16,000 women in the urban and peri-urban parts of the country, with a total amount of D100 million and a successful repayment rate of 100 per cent, which is a laudable initiative and worthy of commendation.

According to her, Reliance Financial Services’ areas of intervention clearly show that the company is true to its triple bottom-line mission, as a social enterprise with very strong developmental focus while preserving the planet.

“The provision of affordable financial services including loans to rural women is in furtherance of the United Nations Sustainable Development Goals.”

The Vice President further stated that all these laudable global goals that the world has embraced had been continued and would continue to be championed by President Yahya Jammeh, working in partnership with the women of The Gambia.

“The Government of The Gambia through the Ministry of Finance and Economic Affair, Ministry of Trade, Industry and Employment and the Central Bank of The Gambia has been and continues to advocate and challenge the financial services industry, to continually be innovative and develop products that accelerated the financial inclusion of the majority of Gambians living on less than US$1.00 per day.”

She also said making positive contribution to the development and introduction of the women finance programme by Reliance Financial Services, where women could access loans with interest repayments as affordable as D5 per day and a grace period was a principal inclusion.

The fact that the only collateral the women are required to provide is their solidarity group guarantee is, indeed, refreshing given that the average rural woman does not have access to the traditional securities such as a title deed in their names, she continued.

Insisting on the provision of leased properties as collateral to access loans for rural women would be a huge barrier to entrepreneurship development and poverty alleviation, she added.

The development and promotion of special products -the Reliance Deposit for Development programme from as little as D10,000 from individuals, as well as public andprivate enterprise with a view to supporting 100,000 women entrepreneurs, was, indeed, an innovation and worthy of support by all and sundry.

“Reliance’s vision to reach out to both the public and private sector to generate the much-needed capital to support 100,000 women is, indeed, reflective of the public private partnership strategy.”

The Government of The Gambia continues to advocate as an effective vehicle to drive entrepreneurial growth and economic development, she said, adding that the government is very supportive of development initiatives that put women at the forefront.

The Gambia government’s quest to aggressively drive and achieve the goals of Vision 2016 on rice sufficiency would become a reality, with initiatives like Reliance’s Women Finance Programme that target women and communities involved in rice production and actors operating within the rice value chain.

“I have the honour and privilege to declare the pledging session open, and to ask all members present to pledge to the creation of the Women Finance Deposit for development to support the operation that would make access and affordable finance to 100,000 women.”

She congratulated Reliance Financial Service on the occasion of their 10th anniversary, adding that the launching ceremony was testimony to the numerous lives changed by Reliance from 2006 to date.

On behalf of the government and people of The Gambia, she wished the Reliance Financial Services a blessed 10th anniversary and prayed that they celebrate many more anniversaries in the years ahead.

“I am making a pledge of D20,000 to support the financing of four women entrepreneurs.I will kindly ask the audience to pledge generously to make this laudable dream a reality and support our rural women in our quest for sustainable economic development.”

Also speaking, the chairperson of Reliance Financial Service, Amie Bensouda, said the occasion marked the official launching of the Women Finance Programme and the Deposit for Development, as part of the activities commemorating the International Women Day.

The celebration of Women’s Day was fitting as it seeks to remind all and sundry about the barriers women face generally, she said, adding that for them at Reliance Financial Services, they opted to focus on the solution that they as a financial institution could offer, in order to bring down these barriers and harness the full potential of women in the socio-economic development of the country.

The board and management of Reliance had drawn inspiration from potentials of the women, which led to the development of an exclusive women finance programme that seeks to promote access to finance for women from within their own communities and villages, which was piloted over an 18-month period, she added.

“We at Reliance appeal to all of you in your official and personal capacities to invest in our deposit for the development of women finance programme based on the multiple of 10 principles.”

This means that Reliance would pay a minimum of 10 per cent on a minimum deposit of D10,000, which would be used to finance at least 100,000 women entrepreneurs in The Gambia, she added.

Salifu Ceesay, the alkalo of Sinchu Alagi and Fatou Sonko of Fass Nyaga Choi, among other beneficiaries, all expressed appreciation with Reliance Financial Services in trying to change their livelihood.

In their testimony they acknowledged the efforts of Reliance Financial Services, and how the loan given to them changed their livelihood.

They thanked the management of Reliance for the good work they are rendering in changing the status of women in the country.

In giving the vote of thanks, Baboucarr Khan, the CEO/Managing Director of RFS, explained the rationale behind the event.

He said the International Women’s Day culminated with Reliance Financial Services organising the event to promote the women finance programme geared towards supporting the potential of women.

The occasion was chaired by the Executive Director of Reliance Financial Services, Ismaila Faal, and the end of the launching, GCCI pledged D100, 000 to support the women finance programme.

You make it happen