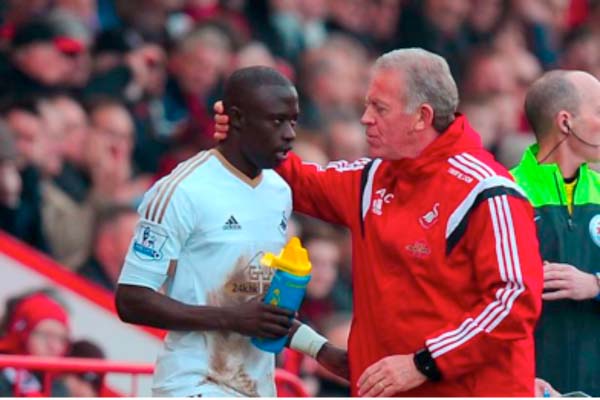 Swansea City’s first team coach, Alan Curtis, was full of praise for his Gambian winger Modou Secka Barrow who became the first Gambian to score in the Barclays Premier League in his side’s 3-2 defeat to AFC Bournemouth.

Barrow was named in the Swansea starting line after Ghanaian Andre Ayew failed to recover from an injury.

The Scorpions’ wing wizard paid the manager’s trust with a well-taken equaliser two minutes after Ivorian Max Gradel had given the host the lead on 37 minutes.

“He has made a huge impact from the bench recently and was due a start. He gave us an edge and a real threat going forward,” Said Curtis.

Barrow was also involved in the Swans second goal, his well-crafted cross was fired in by the in-form Gylfi Sigurdsson and drew level for the second after Josh had put Cherries 2-1 up five minutes after the restart.

But Steve Cook headed in late on to secure Bournemouth a third successive league win which move them 13 points clear of the relegation zone.

The Swansea forward who is expected to be named in National team coach Sang Ndong’s squad to face Mauritania in Gabon 2017 Orange Africa Cup of Nations qualifying later this month, says it feels good to be the first Gambian to score in the Premier League.

“It is a very proud moment for me.”

“To become the first Gambian to score in this league makes me very happy.”

Mo revealed to the club’s website why he darted to the bench to celebrate with France international striker Gomis.

“I wanted to celebrate with Bafe. He has supported me a lot and he told me that if I keep on doing what I’m doing I will score soon enough. He said that I am quick one v one and that if I have a chance, I can do it.”

“My team-mates kept pushing me and I kept working on my finishing. The fans wanted me to score too, and now I can finally get this out of my mind and focus on scoring more goals.”

Modou’s goal has now extended the number of nationalities to have scored in the premier league to 95.

“It was important to have scored so soon after they had gone ahead. It gave us more confidence and we ended the first half well.”

Barrow still felt it was a missed opportunity for Swansea after a back-to-back win over Arsenal and Norwich.

“The result didn’t go the way we wanted,” he said.

“After we equalised to make it 2-2, we had some chances to go in front, but the ball didn’t fall for us.

“It is a missed opportunity, but we just have to keep going. If we can get a win on Saturday, we can go on from there.”