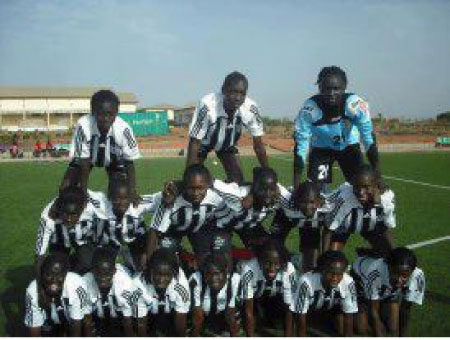 The Gambian female league Champions Red Scorpions will rub shoulders with Makasutu of Brikama in a test game set for Friday 15 March 2013, at the Brikama Mini Stadium.

Red Scorpions will use the test game to prepare themselves very well for an international female tournament in Senegal from 1 to 7 April 2013.

The tournament will bring together teams from Senegal, Guinea Bissau, Burkina Faso, Ivory Coast and The Gambia’s Red Scorpions.

Makasutu, on the other hand, will use the friendly game to prepare themselves for the 2012-2013 Gambia Football Association (GFA) division one female league expected to get underway later this year.

Speaking to Pointsport yesterday, the media office of Red Scorpions, Baboucarr Sey, said the test game is organised to raise funds for the team’s participation in an international tournament in Senegal, adding that the gate fees is D10 for the pavilions and D5 for standing.

Sey stated that six teams are expected to take part in the tournament with two teams from Senegal, The Gambia, Burkina Faso, Guinea Bissau and Ivory Coast for the week-long tournament.

Sey seized the opportunity to call on companies and all and sundry to come out and patronize the Red Scorpions in their quest to participate in the female football tournament in Dakar, Senegal.