The Red Scorpions, which have been operating successfully for the past 21 years, on Saturday 11th April 2009, celebrated their 21 years of existence at the Friendship Hotel in Bakau.

Miss Choro Mbenga, a coach and the president in her own right to the club revealed that the club was formed Mr. Ben Hooper in Bakau.

She maintained that female football is as interesting and productive as male football and therefore urged the public to give it their fullest support.

She mentioned some of their players, the likes of Merro, who she said are doing exceptionally well overseas in Germany. She thanked their Senegalese friends with whom, for more than 20 years, have had a fruitful relationship.

Dodou Bojang, a sports journalist, expressed his lack of knowledge in female football and therefore pledged that henceforth he would concentrate and see how best he can help promote female football.

Mr. Ben Hooper, the founder of the team, acknowledged the presence of the parents without whose green lights, she said, their daughters would not have made the Red Scorpions what it is today. "Our youthful girls should be given the equal chance given to youthful boys where sports is concerned so as to enable them to discover their potentials," he said. 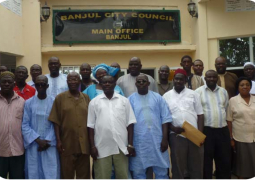