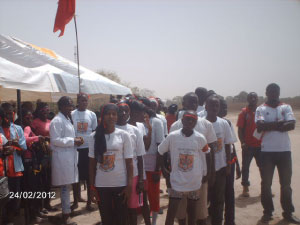 The most anticipated inter-house athletics championship has finally ended with exciting results.

Characterised by brilliant exhibition of skills, The Rose Kali inter-house athletics event attracted thousands of spectators from Banjulinding and its environs.

At the end of the events, Red house emerged champions after securing 190 points to edge out Blue house who took 2nd position with 178 points.

Yellow house took 3rd position with 128 points while Green house finished at the bottom of the table with 126 points.

The athletics championship was part of the school’s curricular activities preparations for the forthcoming national inter-schools’ athletics competition.

As the champions, Red House was awarded a giant trophy presented to them by the headmistress of the school, Madam Ibiam, who described the event as highly competitive.