At least 40 houses were destroyed by the heavy rain and windstorm in Jarra Bureng village in Lower River Region on Saturday.

The rain started around 1am with heavy wind which lasted for about five hours and blew off the roofs of more than 40 houses in the village.

Mustapha Jobe, a native of Bureng, said: “The rain has made a serious destruction in the village; it has made the lives of the people very difficult.”

He appealed to the government, Red Cross, National Disaster Management Agency, NGOs and individual philanthropists to come to the aid of the victims, particularly in building their houses.

The victims, Mustapha said, also need food support for they have lost most of their properties including stored food.

In addition to the houses destroyed, he said due to the heavy long hours of rain and wind, many trees fell down.

As a result, the community needs assistance of seedlings from the forestry department, America embassy and the National Environment Agency to embark on tree planting exercise.

Mustapha said Bureng is a century old village with houses made of mud blocks and thatched roofs and has a population of 4,000 people.

He said Bureng people are mostly farmers and the tragedy of the rain has cost nightmare to the people.

He said at the level of the community, they are working with the victims of rain to build temporary houses while also trying to take care of their farms as their source of living.

Meanwhile, Mustapha commended the natives of Bureng in the diaspora for their swift support by sending in D100,000 for the affected households to buy rice for their upkeep. 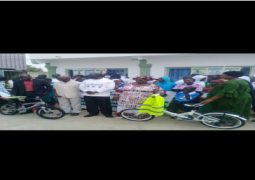