Modou Sowe, the first prosecution witness, recently continued giving his evidence in the trial involving one Sheriff Kanteh, who was charged with the offence of wilful damage to property, before Principal Magistrate Ibrahim Kijera of the Bundung Magistrates’ Court.

Modou Sowe, who had earlier told the court that the accused had spilled a gallon of cooking oil on his six bags of rice, identified the said gallon and the bucket in court and said the gallon belonged to him.

The prosecution at that juncture, applied to tender the said bucket and the gallon of cooking oil as exhibit.

The accused objected to the tendering of the said items on the grounds that he never touched any of those items, because he had no business with them.

However, the items in question were admitted in evidence as exhibits.

The witness continued and said it was the accused who spilled oil on his goods, which prompted him to report the matter to the Brusubi Police Station.

Under cross-examination by the accused, the witness maintained that it was the accused who spilled cooking oil on his goods and not any other person.

He said all what he had said was the truth. 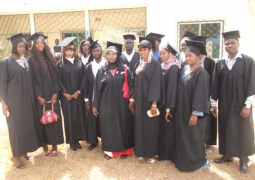