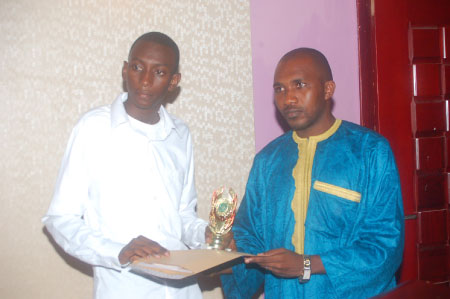 Abdoulie Bah is winner of the SJAG Sports Broadcaster of the Year award at the association’s 4th National Sports Award held on September 1st at the SunSwing Hotel.

2011/12 Achievements/contributions:
2010\2011, Bah covered African Under-17 Championship in Rwanda, African U-20 Championship in Johannesburg, South Africa, and commentated on Gambian matches in Tunisia and Ivory Coast during the qualifying campaign.

In 2011, he covered the World University Games (Universiade) hosted in the South Chinese Province of Guandong.

In 2011 August, he earned A Diploma from the International Sports Press Association (AIPS) during the Young Reporters’ Training School in Shenzhen, China, as part of the 30 best young journalists from the five continents.

January 2012, Bah was part of only 6 selected young reporters to cover the Winter Youth Olympic Games held in Innsbruck, Austria, courtesy of AIPS.

In 2012 May, Bah covered the Arab Sports Media Forum hosted in Ramallah, Palestine.

Previous Achievements/contributions:
Bah is the only Gambian journalist to commentate on the National U-17 and U-20 in the last qualifiers.

He covered the African U-17 Championship held in Rwanda 2010. He also produces and presents The Gambia’s most popular lunch time radio sports show called Sports Talk on West Coast Radio.

Bah has also served as elected assistant secretary general of the Sports Journalist Association of The Gambia. In 2009 he was Sports Broadcaster of the Year, and received promotions from a junior reporter to a presenter and then to producer/editor.

In 2009, he covered AFCON qualifier in the match between Senegal V Gambia in Dakar.

In 2008, he also covered a sub-regional championship in Ziquinchorr, Senegal, with The Gambia being represented by the NISA team.