Members of the private sector in The Gambia and youth organizations, as well as farmer organizations, civil society and community-based organizations have expressed appreciation to IFAD boss, Dr Kanayo F. Nwanze, for his two-day official visit to The Gambia recently.

Speaking to our reporter shortly after the return of the IFAD boss regarding his meeting with members of the private sector and youth and farmer organizations, the National Coordinator of Global Youth Innovation Network Gambia (GYIN-Gambia), Mamadou Edrisa Njie, expressed delight and appreciation on behalf of youth organizations in the country to have the IFAD boss visit The Gambia, who was the first sub-Saharan African president at the level of IFAD to visit to The Gambia.

Mr Njie also noted that the visit of the IFAD boss would yield dividend in the country as IFAD boss and President Yahya Jammeh are the champions in the promotion of women advancement and youth empowerment.

The IFAD President was in The Gambia to see for himself the commitment of women and youth in the country, especially at the rural level, Njie said.

According to Njie, the visit was an opportunity for youth and farmer organizations to inform the IFAD boss of their expectations from the IFAD projects in the country.

Njie revealed that under the leadership of Dr Nwanze, the Creating Opportunities for Rural Youth (CORY) was approved and The Gambia is among countries currently implementing the CORY project.

He stated that building the capacities of rural youths is key in IFAD programmes and the agricultural sector needed to be seen as a business sector for the youth.

He expressed delight on behalf of the youth organizations of the country for being given the opportunity to participate in the two-day official visit of IFAD boss to the country.

GYIN-Gambia, Njie added, would leave up to expectations, while assuring the youth of the country that GYIN-Gambia would empower Gambian youth who are the cream of the society.

Alhagie Bassi Mboge, president of the National Farmer Platform of the Gambia (NFPG), hailed the effort of the IFAD boss for visiting The Gambia to see for himself some of their project intervention sites. 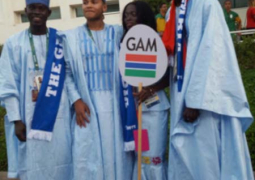