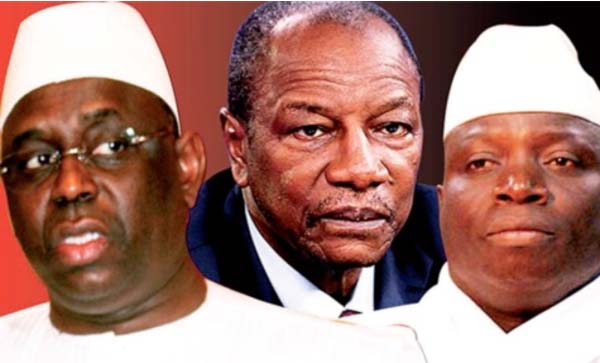 President Alpha Conde of Guinea left Banjul Saturday after a day’s working visit, during which he discussed with his Gambian counterpart the issue of the Senegal-Gambia border closure.

The Guinean president arrived Saturday morning on a mission to mediate between the governments of The Gambia and Senegal, after the border was closed to commercial vehicular traffic since February.

The border closure has affected road transport, particularly commercial taxis and trucks transporting goods, greatly hindering trade between the two neighbours, as well as trade between The Gambia with other countries in the sub region.

Speaking in Banjul on the Gambia-Senegal relationship, the Guinean president spoke in terms of looking to the future, and announced that both presidents would try to advance things in resolving difficulties in the relationship.

President Conde thanked President Yahya Jammeh for “his leadership in accepting to send a delegation to Senegal” to resolve the border closure issue.

He added that “we are Muslims and both leaders share the same population, which should not suffer.”

Meanwhile, President Jammeh speaking on the occasion said, “I hate to see Africans suffer. I hate to see countries within Africa suffer.”

He added that he had “no intention of go to Senegal to resolve the border, because our border is opened and the tariffs are down.”

He said his position was that the Senegalese closed the border, and he will not negotiate with somebody that closes the border.

Jammeh went on to assert that he has “nothing to do with it,” because he did not close the border, and that “if people in Senegal are suffering, it is their government because they closed the border; people are suffering, and that is the truth.”

President Jammeh repeated that as an African, he does not want to see Africans suffer.

“If it is for us to go and discuss the issue so that people who are suffering will not suffer again, I will do it not because of {doing so} from a position of weakness, but a position of dignity.”

According to Jammeh, “this is more than the 8th time that the Senegalese, since 1994, have been closing the border at any time, and anytime they wish to open they open it.”

President Jammeh said the tariff they are complaining about “was reciprocal.”

“We charge them the same they charge the Gambian trucks. They have no excuse to say Gambians arbitrarily raised the tariff, because after all the complaints we complained to them, they said they are not aware of that.”

He emphasised that “Gambia has not done anything wrong,” and that many Africans given the impression that Gambia has a conflict with another country, have come to realize that The Gambia has not closed the border; that even the Senegalese have realised that the Gambian border is open.

“We have more than 950,000 Senegalese in this country, and you have less than 5,000 Gambians in Senegal. If you go to our markets, they are all Senegalese; you go to Sandaga (well-known market in Dakar) you don’t find any Gambian there.”

President Jammeh added that as a pan Africanist, “we are all as one family. I do not want Africans to be the laughing stock of others.”

Senegalese including Guineans are treated under the same laws that Gambians are being treated in this country; and they live peacefully in this country,” he further stated.

“And that is what I want to see in Africa; an Africa free from conflict so that we can derive benefits from our huge natural resources. We cannot spend all our resources in fighting each other, and then we become poorer at the end of the day.

“That is not my wish, and I have done it for the sake of him (Conde) and for the sake of Islam and all the Muslims,” President Jammeh declared, in concluding his statement.

Speaking in Banjul before his departure, Conde described the relationship between his Guinea and The Gambia as “very good”, adding that this would be further strengthened.

Noting that there is a family relationship too, Conde added, “Do not forget that the Gambian First Lady is from Guinea.”

He announced that he looks forward to coming on an official visit to discuss with Jammeh and strengthen bilateral relations.

Meanwhile, according to information received by The Point, President Alpha Conde has an interest in mediating on the border issue, as trucks headed for Guinea are among those held up at the border.

For example, one Barry a Guinean businessman has revealed that he has 75 trucks, some loaded with consumables such as butter, which are stuck at the border.

Another related piece of news is that a kilo of sugar in Guinea Bissau has tripled in price, as sugar coming from the Gambia through Senegal cannot do so because of the border closure.

These are some of the international ramifications of the border closure, according to observers.