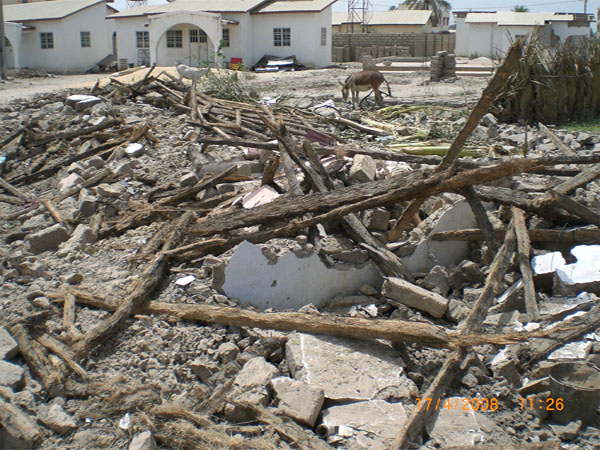 The frequency of demolition exercises embarked upon by the Department of Physical Planning in recent times has continued to be a source worry to many. The latest series of such incidents occurred on Thursday, 17 and Friday 18th April 2008 when three houses were demolished in Wulinkama, a village lying 500 metres away from Brufut, followed by another demolition of a fence belonging to one Yaya Manneh in Tranquil, Brufut, in Kombo North. This reporter went to the scene to establish the extent of the exercise.

In Yaya Manneh's case, the demolition was carried out on a leased property located 21.5 metres away from the road and the area affected is 13m*16.8m. According to the particulars of the lease,Yaya got his compound leased on 1st February 1993 for a term of 99 years. Mr. Manneh indicated that he acquired the piece of land in 1989 and leased it in 1993 but this reporter gathered that the same piece of land was leased to Social Security and Housing Finance Corporation (SSHFC) in 1997 as part of the Phase 2/Extension of Brusubi. According to Mr Manneh, on 31 March 2003, SSHFC personnel visited his premises and took measurements.Thereafter, he continued, he wrote to the Managing Director of SSHFC first on 4th January 2003 on the development, followed by another letter of concern on 21st August 2003, and still another letter to the Director of Lands and Surveys on 27th August 2003. He disclosed that on 28th August 2003, SSHFC replied by means of a letter Ref. SSHFC/HF/36F/Vol.9(9). The Letter reads:

"In 1993, the government of The Gambia allocated the entire Brusubi layout comprising 356 hectares of land to SSHFC for residential development. Following our findings, it has now been established that whereas your house is located on the access road dividing the Phase 2/Extension and the existing Tranquil village, the back of your plot is affected by the project and hence is being assessed for subsequent payment of compensation to you to be followed by demolition of the affected area. You will agree therefore that the need arises for our surveyors to access the premises and take the relevant measurement for valuation purposes. The valuation exercise is presently being finalised by the Department of Lands and Surveys and Department of State for Local Government and Lands. We will revert to you in due course for the payment of your compensation."

According to Manneh, he closed from work one day only to find an undated and unsigned letter thrown into his compound. In the letter, he said, it was indicated that he would be paid compensation of D56, 385.31.

Speaking to this reporter, Landing Drammeh, a man in his 70s, whose compound was also affected by the demolition, said: "I got this plot of land since 1991 and I have been living here with my family of 33 people for nearly 8 years. One day, almost four years ago, one Buba Sanyang claiming to be a Surveyor with Social Security, came and told me that Government wanted to see our compound documents. I gave him all the receipts of the rate payments I had been doing since 1991. Up to date they are not returned. After sometime I was called by the same Buba Sanyang to sign some documents. Sadly, because I cannot read, I signed without knowing what I signed. Then to my shock and surprise a D15,000 compensation was given to me for my whole compound with houses.

Keluntang Drammeh and Omar Drammeh whose compounds were also demolished, alleged that they were also coaxed into surrendering their compound documents to the same Buba Sanyang, recollecting that they were somehow handed D15,000 and D6,000 as compensation respectively.

Incidentally, there were media reports that more than one hundred residents of Busumbala in Kombo North, were on Wednesday, 23 April left homeless following a demolition exercise carried out there.

However when this reporter attempted to speak to relevant officials at both SSHFC and Physical Planning for clarification, none was prepared to comment.