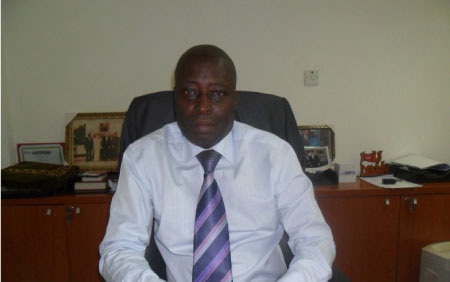 Hello and a warm welcome to yet another edition of Personality of the Week, your weekly column which profiles Gambian men and women of interest.

In today’s edition, we bring you the profile of a man who has made a tremendous impact at The Gambia’s Ministry of Finance over the years and now works as the Managing Director at Sahel Bank Gambia Limited. He is Mr Dodou Bami Jagne.

Mr Jagne is a soft spoken and self-assured man. He projects a reassuring air of confidence and professionalism. He comes across even to strangers as an achiever. Mr Jagne knows what he wants from life and how to go about getting it.

Mr Jagne was born in Banjul in August 1952 to the late Talla Jagne and Mary Smart Jagne.

He attended Albion Infant school and then St Mary’s Primary school. He then graduated to Gambia High school (now Gambia Senior Secondary school) which he attended from 1964 to 1970 and where he sat his O' Level examinations.

He says: “I did not go to sixth form due to financial constraints, but that was more out of necessity, although I met the (academic) requirements.”

He describes his parents as hardworking people who tried by all means to ensure that he got a good education. He tells how his mother had to borrow the money for his O' Level examinations but that she kept it a secret from him as she was a proud woman.

But it wasn’t all work for the young Mr Jagne. He was and still is a keen musician. He explains: “By that time in 1973 I also had an interest in music and I said to myself ‘ok, am still young I can still explore life’. But I never lost my focus for education.” It was at this time that he got a six week work placement at the then Ministry of Finance and Trade thanks to his aunt who was the head of the registry.

Luckily for Mr Jagne, after his six weeks placement at the ministry, an official realised that he had very good handwriting so they extended his work for another three months to do the filing and keep the books. This was how Mr Jagne’s thirty year career with the Ministry of Finance began.

While at the ministry, Mr Jagne has had many responsibilities. He was in charge of trade fares programs for The Gambia government. He led many Gambians on trade fares to countries like Senegal and Belgium. He was also among the first in the country to be sent to the UK for the two year AAT program.

After completing the program he returned to the Gambia where he was assigned to the loans unit as the Senior Loans Officer under the late Badou Mboge. He later took over Mr Mboge’s position after Mr Mboge moved on through the strong recommendation of Mr Balla Gaye.

Mr Jagne was appointed as Principal Loans Officer in 1983 and he combined that with being the National Authorising officer as a designate of the then Permanent Secretary.

He left finance for fifteen months to do his own consultancy work giving advice mainly to individuals and companies. He says: “I like working at public institutions. I think it is the place where you are able to give most society. I like sharing and by sharing also you learn from people, I don’t feel too big or important.”

Mr Jagne believes in the importance of leaving a world in a fit state for future generations. He says: “When you are leaving a legacy, let it be a good legacy that people would want to follow or improve on, let it be a stepping stone in the sand of time.”