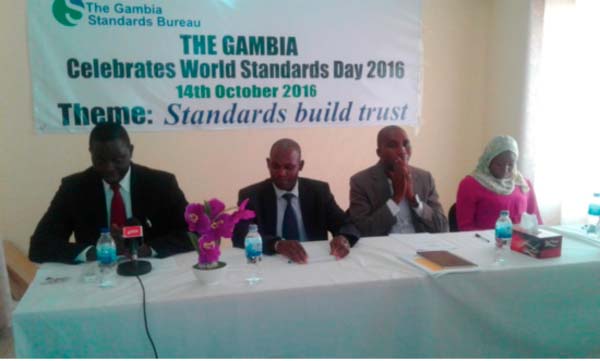 The theme for this year World Standards Day is “Standards build trust”.

Speaking to the press at the Gambia Standards Bureau office in Fajara, the Director General of the Standards Bureau, Papa Secka, said the day was set aside to create awareness on the role of standards in both national and global economies.

He said these organisations have come together to form a cooperation mechanism known as the World Standardisation Cooperation.

Mr Secka stated that the reasons are simple, because the activities needed to be coordinated properly by the named organisations.

Mr Secka further added that standards connect them with reliable modes of communication, codes of practice and trusted frameworks for cooperation and introducing common interpretations on reciprocal sides of a communication or transaction.

Standards are essential to mutually beneficial trade and resource efficient international commerce, and social interaction relies on common respect for fundamental sets of norms, concepts or meaning, and international standards codify these norms to ensure they are accessible to all.

Also speaking at the briefing session was the Director of Standardisation Division, Bai Dodou Jallow, who said in celebrating World Standards Day, the Bureau in the last few years had focused a lot in trying to make key stakeholders be sensitised when it comes to the activities, roles and functions of the Gambia’s Standard Bureau.

The Bureau has been celebrating this day annually by going to institutions and talking to students, he said.

This year, he added, the Bureau tries to move on to other things when it comes to the activities of the celebration.

“We want to go upcountry to interact with the stakeholders, consumers and a cross-section of the communities and the users of standards in the regions.”

A nationwide sensitisation activity in all regions, on the importance of World Standards Day, would be conducted, especially on published national standards, he further stated.