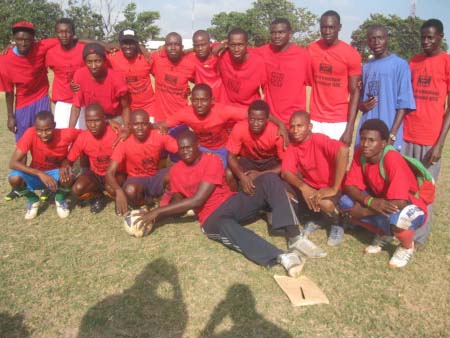 On the other hand, Omar Bah scored YJAG’s consolation goal.

KMC Municipal AIDS coordinator Haddy Mboge, in handing over prizes to both teams after the warm and genial battle, said they were happy to see the youth come out in their numbers to play the match.

According to her, they targeted the young people because the youth and women are the once mostly affected by HIV according to statistics gathered.

“If you want to make change you have to start with the youth,” she said, adding: “If you do not know your status you cannot protect yourself and your partner.”

She therefore challenges the youth to take HIV test and know their status before getting married, describing it as critical.

“Whether you do the test today or not you are going home with information you can share,” she said, adding that statistics has shown that 35,000 people are living with HIV in The Gambia.

“People do not want to come out to have the test and know their status, as they are scared,” he stated.

YJAG President Nfamara Jawneh, in his remarks, said the turnout of members of YJAG to the event shows their commitment to the development of the association and sensitizing the public about HIV and AIDS.

Mr Jawneh, who is also the deputy editor-in-chief of The Point newspaper, told members of his association after the game that they were not losers but runners- up.

“This game is important for our health and the fight against HIV/AIDS, so we should continue training, as we can have more of this kind of games,” Jawneh told YJAG members.

He also took time to thank Aminata Sanneh who surprised the YJAG squad with juice during the game.

“The more we remain united the brighter the future for the association,” President Jawneh remarked, saying long live YJAG!

Meanwhile, ambassadors were awarded first prize of D2300.00 while YJAG got a consolation prize of D1200.00 courtesy of NAS.

Training for 50 applicants wraps up today