Midrand, Johannesburg – The Pan-African Parliament (PAP) Friday concluded its fourth ordinary session of the Second Parliament with a number of recommendations presented by its various permanent committees.

The Committee on Rural Economy, Agriculture, Natural Resources and Environment, concerned by the economic, social and political impact of climate change on the African continent, recommended that legislations relating to climate change be promoted and harmonised.

The Committee on Financial and Monetary Affairs, in order to explain the real needs of the PAP and defend its budget, recommended that members of the Committee along with a representative of the administration forms a delegation that accompanies the budget when it is submitted to the African Union policy organs.

The Committee on Cooperation, International Relations and Conflict Resolutions being deeply concerned by the persistence of violent conflict in Africa with special reference to Libya, recommended that a fact-finding mission be sent to Tripoli and Benghazi that will study the extent of the violent conflict and to send a goodwill mission that will gather information and express solidarity on behalf of PAP.

The Committee on Health, Labour and Social Affairs noted that although treaties and protocol for medicines regulatory harmonisation exist in the majority of Regional Economic Communities (RECs), implementation of agreed decision remains a challenge. Therefore, it was recommended that there was a need to ensure that all the RECs have policies for harmonisation of medicines regulation, and also ensure the review of national medicines laws which take into account the entire core regulatory functions as recommended by World Health Organization (WHO).

The Committee on Education, Culture, Tourism and Human Resources recommended that the PAP should establish a partnership with Kenyan authorities for the organisation of the first Pan-African Exhibition on Intra-African Tourism.

To conclude the session, Hon. Dr. Moussa Idriss Ndélé, President of the PAP, thanked the Committees for their informative reports.  He further thanked those present for attending and commended the work and the support of the PAP Secretariat.

Finally, he urged those present to play a role in calming the situation in conflict affected countries by supporting the work of other AU organs like NEPAD and APRM.

The next Session of the PAP, the Fifth Ordinary Session, will be held here in Midrand from October 3 -14, 2011. 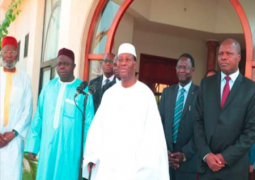