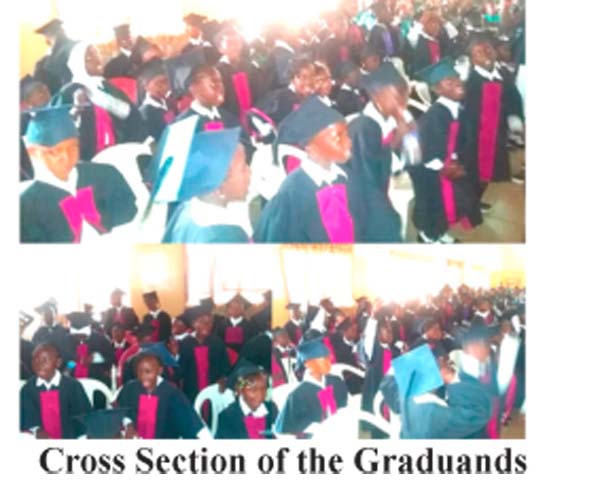 Palmamary School of Bundung Borehole has this year graduated 58 pupils of the school who have completed nursery and primary level education.

The ceremony, held on Saturday 4 June 2016 at the B.O. Semega Janneh Hall, was the 5th graduating batch of pupils since the inception of the school in 2007.

The head boy of the school, Seedy Gaye, in delivering his valedictory speech, said the “hard work” of their parents, teachers and the management of the school has paid off.

“After so many years of hard work, it has been a fruitful endeavour for us,” Gaye said.

He went on to advise all his colleagues to continue to take learning seriously and look forward to achieving higher heights in education as “this is just the beginning” of their educational journey.

Speaking at the ceremony, the proprietor of Palma Mary School, Mr Abbas Koroma, said the occasion was another milestone in the annals of the school.

“It is a joyous moment for the management of the school to witness yet another class of graduating students,” he said, adding that the development of education in The Gambia has always been a priority to him.

“I took the bold step to come up with this project to contribute my own quota towards the development of education in The Gambia,” Mr Koroma said, adding that the school has yielded so much fruits over the years as it has continued to go from strength to strength.

He also said he has further plans to increase the school’s current structure of more than 10 classrooms with a computer lab as of next year.

The school, he said, also serves as an epitome of excellence in providing quality education, as it is trilingual.

“Our students are taught in three languages, namely English, French and Arabic.

He congratulated the graduands and advised them to forge ahead in good stead.

“As you graduate today, you have made your parents proud, as you will grow up to form the cream of the society that rubs shoulder to shoulder with great men and women of The Gambia and the world at large,’’he said.

He also called on parents to cooperate with the school to enable it offer good education to their children, which will prepare them for brighter future.

“Education goes a long way to developing a person’s life and guaranteeing a prosperous future; therefore parents should cooperate with us so that together we will create a brighter future for our children,’’ Mr Koroma said.

West African single currency due in 2015