The National Assembly Members yesterday adopted the motion on the Second Ordinary Session of the Fourth Parliament of the Pan African Parliament (PAP).

The PAP Second Ordinary Session was held from 3 to 13 May in the precincts of the PAP in Midrand-Johannesburg on the theme: “2016: African Year of Human Rights with particular focus on the rights of Women.”

The National Assembly Member for Foni Brefet, Bintanding Jarju, who was among the delegation to the PAP Second Ordinary Session in South Africa, said the report was “well self-explanatory, very simple and straightforward”.

She further emphasised ratification of the protocol on coordinating the Pan African Parliament, adding that without the protocol being ratified it would not be of any use to the continent.

“We cannot make any model laws; we just go there to discuss issues and then come back, but if we are given the legislative powers then the PAP will be meaningful to the people,” she said.

“We are advocating and pleading with this august body to speedily ratify this protocol, as it is now only Mali and Sierra Leone that have ratified theirs recently; before it was only Mali throughout the African continent of 54 member states that ratified the PAP protocol.

“So we are also advocating for us to be in number three position throughout the continent in ratifying this protocol,” she told fellow deputies.

The Majority Leader and NAM for Serrekunda East, Fabakary Tombong Jatta, who was also among the delegation to the PAP in South Africa, said the theme for this year PAP was “African Year of Human Rights with particular focus on the rights of women.”

He added that women are gradually closing the gap between men and women, and this is critical and important because “women form the highest population of the world”.

He said records had shown that women leaders usually excel, and it is important that they try to bridge that gap, and “PAP is second to none in that adventure”.

Hon. Jatta also said that during the session of PAP, they had the chance to meet with lots of important dignitaries, whom they gave goodwill messages and were also in support of PAP.

The Majority Leader added that they must commend the African leaders, as ECOWAS had been in place for almost 40 years without being legislative.

He said within 10 years or less the African heads of state agreed to give legislative powers to the Pan African Parliament which represents the African people, and he thinks it was “very possible”.

Mam Cherno Jallow, NAM for Upper Niumi, said it was high time the National Assembly committees found out what are the impediments underlying that are still impeding the exercise of ECOWAS legislative powers.

“We should thank our African Leaders for the commitment and for where they are, but equally we should also be mindful to understand the underlying problems and to solve them.

He said further that the problem with Africans is that when they are making budgets they take the biggest part of the budget and put it on donors, and they expect the resources to come from donors.

He said looking at their budget, 63 per cent, that is, USD559, 587,236, is expected to come from the donors. What are the African states going to do if they are unable to get what they expect from the donors?” he challenged African budget planners.

Despite all the denunciation put on the Pan African Parliament for the ratification of the protocol, National Assembly Members still agreed to adopt the Second Ordinary Session of the Fourth Parliament of the PAP. 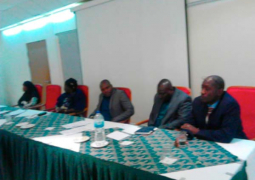