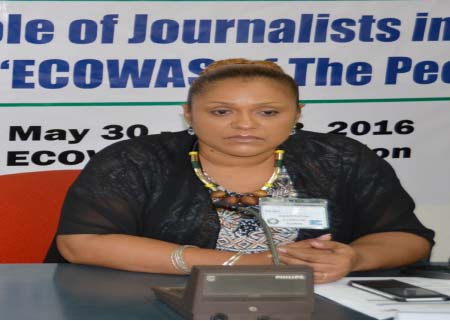 The Ecowas Commission is now more accessible to citizens of West Africa and the world at large than ever before, as the information gap between the citizens and the commission has been bridged.

As part of ongoing efforts to reposition and enhance the visibility of the West African regional bloc, the protocols, programmes and other activities of the organisation are now readily available.

The director of the Communications Directorate of the commission said they now use parallel media – print media, broadcast and online media, simultaneously – as part of efforts to achieve ‘Ecowas of the People’ and Vision 2020.

Madam Sandra Oulate F. Elleingand made this remark while delivering a presentation on ‘the Role of the Communications Directorate in Creating Awareness among the Citizens of the Ecowas Community’ at a weeklong training of young West African journalists, which ended on Friday at the Ecowas Commission in Abuja, Nigeria.

She further said the Communications Directorate mostly rely on the internet, in addition to other tradition means of communication, for wider dissemination and increased awareness among Ecowas citizens.

In this regard, for the first time since the commission was established in 1975, it is now on the social media.The Ecowas Commission is now on Facebook (Ecowas_Cedeao), Twitter (@ecowas_cedeao), and YouTube (ECOWAS_CEDEAO).

Madam Elleingand said they are now using the social media because it is “the fastest growing means of communication in the world”.

“As a result, the Directorate of Communications launched its social media handles on these platforms [Facebook, Twitter and Youtube] in order increase the visibility of Ecowas activities and programmes and interact with community citizens,” she said.

“These social media platforms will serve as an interactive forum between the commission and community citizens, as well as keep them informed of its activities and programmes.”

Information regarding recruitment, procurement as well as political, social and economic activities are featured on the social media, in addition to the new improved website.

“These will bring Ecowas closer to its citizens, allowing them interact and engage the organisation through comments and sharing of information,” the communications director said.

She explained that social media is used to complement the new improved website of Ecowas Commission, which is easily accessible, user friendly and has up-to-date content on the three official languages of the commission: English, French and Portuguese.

The new site, (www.ecowas.int), launched towards the 40th anniversary of Ecowas, last year, replaced the one that had been in use for about 15 years prior to last year.The site can be accessed with different kinds of devices – laptop, smartphone, and computer.

Elleingand pointed out that the improved website will be a source of rich information on Ecowas with easy access by community citizens and other interested people.

With the new interactive design, the website is increasingly attracting visitors as it has registered 49,000 visits between 23 April and 23 May, 2016, according to the statistics of Google Analytics.

In addition to the social media and website, the Communications Directorate also employs the use of outdoor media to pass crucial information.It uses medium such as billboards, brochures, flyers, posters, and banners to further bridge the information gap in West Africa.

The directorate is also working with journalists and press agencies in member countries to further disseminate information to citizens through various media outlets in each country.

The communications director said the renewed strategy of her directorate is consistent with the objectives of ‘transformation from an Ecowas of States to an Ecowas of People’.

Caring for our young