It is refreshing to learn that the National Organizing Committee of the International Roots Festival has been rolled out by the Honourable Minister of Tourism and Culture and clearly there has been the desire and policy objective to rebrand the festival.  This is apt as this culturally oriented festival has been crying for a serious and tangible rebranding and it is refreshing and worthwhile that the authorities are looking in to that direction with the seriousness it deserves.

The Roots Festival was the brainchild of the Tourism authorities of the second republic, who in their desire to revitalize tourism, initiated the International Roots Homecoming Festival in 1996 with the primary objective to attract the Africans in the Diaspora and also to serve as a strategy to prolong the tourist season. As such, the Roots Homecoming Festival commemorates the forced enslavement of Africans and brings descendants of slaves from across the world to share in their ancestral Roots as well as showcasing The Gambia’s rich cultural heritage. It has been mentioned elsewhere that “the objectives and the lofty ideals embedded in the Roots Festival are still very relevant and with a bit of rebranding this festival can be used to appeal and entice certain micro segments”. However, by the time the 12th edition was rolled out in 2016 Roots Festival had metamorphosed in to a national jamboree with limited cultural and touristic flavor, heavy on politics and fanfare.

From a tourism perspective the Roots Festival is a product geared primarily towards cultural tourism with the overriding objective to broaden the product mix and offer another interesting experience for three segments of leisure tourists including culture seekers, ethnic tourists and history buffs. However given its original focus on ‘homecoming’, the core constituency of the Roots festival has always been ‘ethnic tourists’ who share a lot  in common with culture seekers, but they wish above all to explore the culture from which their ancestors come from. These were the core clientele of the Roots Homecoming Festival and for them the objective positioning of the festival to the level of homecoming is the primary motivation to partake in the festival. They seek first and foremost to explore their roots and any keen observer of the Roots festival will not fail to notice this large group of participants mainly from the USA and UK mainly under the auspices of Clarie Mendy and or Alkamba Tours.  For them the highlight of the festival is the Roots Trail or pilgrimage to the Land of Roots in Juffureh and the Kunta Kinteh Island to reconnect with the past.

However, with time there was a felt need at policy level to reposition the Roots Homecoming Festival and broaden its scope to appeal to other segments such as the culture seekers who may not necessarily be on a homecoming mode but merely seek to explore other people’s intangible heritage via food, dancing, arts, drumming and songs.  Culture seekers constitute a notable segment of tourist to the Smiling Coast and according to authoritative sources account for 32% of all tourists to the Smiling Coast and I dare say that a huge chunk of tourists who participate in the Janjanbureh Kankurang Festival are culture seekers and to a certain extent history buffs. For the history buffs, their primary desire is to learn about the destinations past. They view tourism primarily as vehicle to experience things they have studied and learned about and last year I met a group of history buffs- UK university students who came to the Smiling Coast primarily to participate in the Kakurang festival in Janjanbureh.

Thus there were loud cries to rebrand and effectively capture these target groups. The proponents of this school of thought both within the public and private sectors of tourism, argue that in a bid to maximize on the gains and enrich the flavor of roots in line with shifting trends in tourism, Roots festival should be rebranded to appeal to all the above mentioned segments including ethnic travelers in this case African Americans, Black British and all people of African descent in the Diasporas. At the same time Roots should be an international festival with experience based culturally oriented products designed to appeal to culture seekers and history buffs as well as the Interpersonal travelers on seasonal visits to friends and relatives otherwise known as semesters in local parlance. These interpersonal travelers travel to socialize and meet people and the sub segment are those that travel to visit friends and relatives.   For most destinations including the Smiling Coast, these category accounts for a large number of personal trips and is more pronounced during the festive season of December – January.

As such  Roots gradually metamorphosed in to the International Roots Festival , but in my humble view and from a tourism and marketing perspective this initiative failed to undertake robust objective positioning -develop corresponding products to diversify and enrich the festival in line with the needs and wants of the new target segments. As such with time the International Roots Festival lost its original flavor as homecoming initiative and could not adequately attract and appeal to the culture seekers and the history buffs.

In my humble view we need to strike a balance and first and foremost rebrand the festival to the level of an international festival with a mix of culturally flavoured products designed to suit the needs of culture priented segments, but most notably the ethnic travelers who view roots as a pilgrimage to rediscover their roots. For this segment we need to revisit the concept of the Roots Trail with a view to making it more interesting and exciting  and at the same time fix all the problems in Juffureh – Albreda circuit and even add more heritage products in tandem with the local communities to enrich the festival and accord the Africans from the diaspora the opportunity to reconnect with their roots and discover the charm and splendor of the Smiling Coast.

With regards to the culture seekers and the history buffs we need to place more emphasis on products revolving around our tangible and intangible heritage such as the Ya-Bouye Home Cooking and home stays, dancing, masquerades such as the Kankurang festival, Kosee festival, food fairs, Jangjanbureh Kankurang Festival, Ninki Nanka encounters, river trips etc and all other manifestations rooted in our ancient, and charming heritage.

For the interpersonal travelers, Roots could be a mega event to showcase and experience all the best of contemporary Gambia such as musical jamborees, food festivals, cultural carnivals and business to business encounters, networking sessions.

Finally, in this rebranding exercise we need to pay more attention to these foregoing issues including undertaking robust and innovative marketing strategies going forward, while at the same time giving priority focus to product development, product regeneration issues.  Lest we forget the success of any rebranding / positioning strategy hinges on the objective and subjective forces at play. 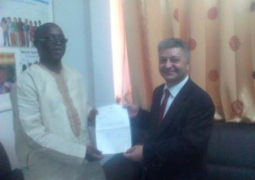