After nine years in remand custody, Sarjo Jarra, alias Pa Jarra, who was accused of rape, on Tuesday 19th January 2010 appeared before Justice Moses Richards of the Special Criminal Court of the High Court in Banjul.

When asked by the presiding judge, Justice Richard, how many years he has spent in remand custody at Mile 2, the man said he has been there since 2000. He told the court that since then only two witnesses were called to testify in his case.

Still responding to Justice Richards' questions, the accused said: "I had been arraigned before many judges including Justice M.A. Paul, H Rose, Justice Joseph Wowo  at the Basse High Court in the Upper River Region and today Justice Moses Richards."

This development occurred on Monday when Justice Richards was presiding over a case, in which the accused Pa Jarra's name was mentioned, but the accused person was not in court. The judge ordered the prison officers to bring him (Pa Jarra) before him.

Justice Richards told the court that his enquiry from the prison authorities revealed that the said Pa Jarra has been in detention for nine years, and that many judges sat over the case, but it could not proceed to conclusion.

Justice Richards later called the attention of the princinpal registrar at the High Court, Abdou Conteh, and asked him to ascertain whether this particular case file is in the registry.

The judge also instructed Mr Conteh to take the accused to his office and listen to him carefully to explain what had transpired.

He further ordered Conteh to take the accused to the Chief Justice's office to further explain his case.

This long detention of the accused prompted lawyers A. Martin and Lamin S. Camara to voluntarily undertake to defend Pa Jarra if there is going to be any further prosecution of his case.

Assan Martin, a human rights lawyer, told the court that he even took it upon himself to visit the man at the remand wing at Mile 2 Prison to enquire about his case. 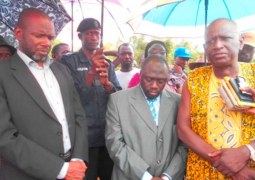