A 37 year-old, Edward Babucarr Okoro , was on arraigned before Magistrate Pa Harry Jammeh at the Brikama Magistrates' Court charged with being in possession of firearms without authority or licence.

According to the particulars of the offence, on 2nd January 2009, at Latrikunda German in the KSMD, the Accused was found in possession of one pistol with 8mm round mark "Mod S.A Cal" without any valid licence or authority. He denied the charge.

The prosecuting officer, Sgt Camara, applied for an adjournment to enable him transfer the case to the Kanifing Division, which had the jurisdiction to try the suspect.

His application was granted and the accused was remanded at Mile 2 Central Prison until the next adjourned date.

In a separate development, one Modou Jallow of Gunjur was on arraigned before Magistrate Pa Harry Jammeh at the Brikama Magistrates' Court charged with house-breaking and stealing.

According to the particulars of the offence, on at , the accused Modou Jallow stole 20 litres of gas oil valued at D650 being the property of Lamin Joof. He denied the charge. 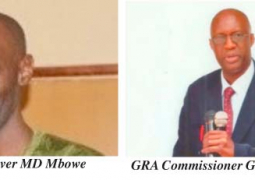