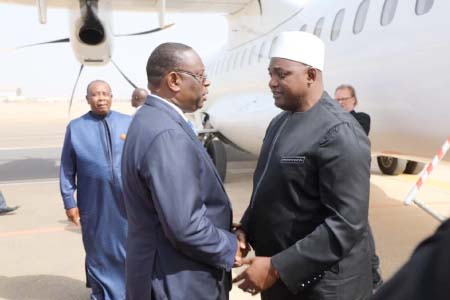 Your Excellency and Dear Brother Macky Sall, President of the Republic of Senegal,

Honourable Ministers of The Gambia and Senegal present,

Senior Officials and members of the delegations of The Gambia and Senegal to this Presidential Council Meeting,

At the outset, and with your kind indulgence Your Excellency, I propose that we observe a minute’s silence in recognition and in honour of the late Mr. Yahya Jallow, former Deputy Executive Secretary of the Senegalo-Gambian Permanent Secretariat who passed away recently after spending the latter part of his life working to consolidate the ties between The Gambia and Senegal. May his soul rest in perfect peace.

Allow me to express sincere thanks and appreciation to Your Excellency for the cordial welcome and hospitality accorded to me and my delegation and for the excellent facilities put at our disposal for this Second Edition of the Presidential Council Meeting. We feel at home among our brothers and sisters in this beautiful city of Dakar.

I express delight and satisfaction that Your Excellency and I are once again co-chairing this session of the Presidential Council Meeting between The Gambia and Senegal following the first session which was convened in Banjul in March 2018.

This assembly provides the political leadership of the two countries with an avenue to dialogue on key issues of common interest and take concrete decisions on them for the mutual benefit and socio-economic development of our two peoples.

Through this meeting, therefore, our two governments and indeed the two of us, have committed ourselves to raise the bar of the bilateral cooperation between The Gambia and Senegal to a strategic partnership and offer the latter as a model for emulation in the sub region and a beacon of hope of integration at the continental level.

The political situation in The Gambia remains calm. My Government has taken all necessary engagements to ensure that participation of all political parties and political groups within the country’s political space goes on unhindered in an environment characterized by the tenets of democracy and good governance.

As Your Excellency is quite aware, the Security Sector Reform in The Gambia is ongoing. In fact, the process is at an advanced stage. The ECOMIG presence in the country is a stabilizing factor, and the participation and support provided by Senegal both in maintaining stability and building capacity within our security services have gone a long way in assisting my Government and its partners to gradually implement the Security Sector Reform.

I hence seize this opportunity to express our sincere thanks and appreciation for the support which Senegal continues to render both bilaterally to our security sector and through ECOMIG.

Furthermore, the Constitutional Review Commission (CRC) and the Truth Reconciliation and Reparations Commission (TRRC) continue with their engagements.

In fact, the CRC has presented a Draft Constitution for review, after conducting final consultations in-country. The TRRC has made much progress in fulfilling its mandate, as it continues to hear testimonies. It is envisaged that a National Referendum on the Draft Constitution will follow, and that the TRRC will soon enter into the concluding phase of its work.

During the first session of the Presidential Council Meeting between The Gambia and Senegal, recommendations were made on reinforcing our resolve to address defense and security matters. Also, key actions were proposed to facilitate trade and the free movement of persons, goods, and services.

Agreements were also reached in other key sectors vital to the development of the two countries.

Although successes and appreciable levels of implementation have been registered since the Presidential Council Meeting in Banjul, more needs to be done to enable both countries to fully and successfully implement the programmes agreed jointly.

Under our economic cooperation, tourism and trade are two areas where the two countries can make significant strides. Our tourism sectors have been collaborating with the aim of building capacity and strengthening hospitality institutions in both The Gambia and Senegal through the exchanges of good practices and students. Destination sharing is also an area that we could venture into for mutual benefit given our geographical proximity.

As such, experts from both countries could undertake studies and propose areas of agreement.

In the area of trade, a key success story has been the inauguration and the opening of the SeneGambia Bridge. The bridge enables free traffic flow between the northern and southern parts of both The Gambia and Senegal.  It enables farmers and traders to reap the benefits accruing from the ease of movement and, to a larger extent, facilitates increased sub-regional trade in pursuance of our ECOWAS integration objectives.

I am happy that, through constant engagements between senior officials and the political leadership of the two countries, hindrances to smooth transport of persons, goods and services between The Gambia and Senegal through border closures are being successfully managed, as dialogue with unions on both sides is yielding fruit accordingly.

Under our security cooperation, an Agreement on Defense and Security between The Gambia and Senegal was signed during my first official visit to Senegal in March 2017 and, subsequently, the first Joint Military and Security Commission meeting between the Republic of Senegal and the Republic of The Gambia was held in Dakar on 11th and 12th September, 2018.

The Meeting reviewed, adopted and signed the Draft Protocol on Operational Arrangements.  The Joint Military and Security Commission recommended that a meeting be convened, by the end of November 2018 in The Gambia, for the various operational commands and staff to define the operational activities for the implementation of the Protocol.

The efforts of both countries towards hosting this meeting should be stepped up and supported to enable the Commission to define the operational activities to be carried out.

In the area of combating trafficking, I am delighted by the strides made through the strong partnership between the drug law enforcement agencies of our two countries. This has taken the form of joint operations, investigations and investigative support. It amply manifests the commitment of the two agencies to combating organized transnational crime.

I am delighted to observe further that this Presidential Council Meeting provides us the avenue to enhance our cooperation and explore new areas. Already, I have been informed that important agreements, particularly in judicial matters and in other key areas, will be signed in the course of this session. As such I entreat all of us to endeavour to implement these agreements fully following signature.

We may be two nations, but we are one people. Our development aspirations are closely linked.

This means that, as a people, and as political leaders of the two countries, our endeavours should revolve around enhancing the advancement of our peoples and fostering the economic development of the Senegambia region. This is a responsibility that both governments should task themselves.

I remain confident that with Your Excellency my dear brother, we can cement our existence as two nations living in peace and prosperity.

Once again, I thank you and your government for hosting us for this meeting. 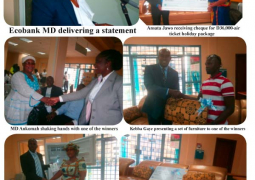 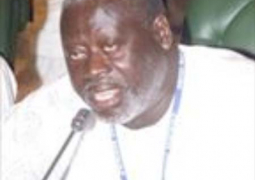