Omar Bun Hatab Islamic School in Brikama on Sunday 31st March 2013, held a speech and prize giving ceremony for 82 students (Grade 6 and 9) at a colourful ceremony held at the school ground.

The vision of the school was to create conducive learning centre which would improve standards in both Arabic and English education to enhance the production of productive citizens, equipped with knowledge, skills and attitudes towards self-reliance.

The award winners were: Abubacarr Sunkar Darboe, who was awarded the most outstanding student amana exams in 2010, and Omar Jatta Demba, who emerged second.

Certificates were also given to various deserving winners from various grades.

Speaking at the ceremony, Alhagie Jatta Demba, Founder and Proprietor of the school said, the school was established in 2007, when it started with a nursery school to grade 6.

Mudir Sheikh Salim Darboe, the Principal of the school said, also called for support from everyone who can come to their aid.

Musa Bayo, Education Officer for Arabic and English Schools at Region 2 called on parents to take their children to schools, saying education is the backbone of every country. He also commended the school for their stand.

Both the head boy and girl (Malang Kambai and Isatou Manjang) gave speeches at the ceremony.

The day also witnessed the opening of the Munazamat sponsored tap at the school. 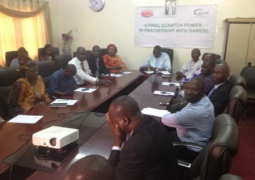