The Gambia is witnessing a nationwide vaccination campaign against meningitis targeting people between 1 and 29 years of age.

On Thursday people gathered in Brikama in the West Coast Region to witness the official launch of the 2013 vaccination campaign in the country.

In his statement on the occasion, the minister of Health and Social Welfare, Omar Sey, said the day marks another important milestone in vaccine prevention childhood diseases in The Gambia.

According to him, they are about to introduce a new vaccine against Meningitis A, known as Menafrivac, which has been created and is expected to dramatically cut the region’s meningitis epidemic.

The threat of meningitis, he remarked, has a devastating effect on communities, families and individuals.

Minister Sey said: “During the meningitis season many people decide to avoid large gatherings where the risk of transmission is high. This can mean children missing school and adults not going to work. The infection causes repeated epidemics during the annual dry season in sub-Sahara - a region known as the meningitis belt.”

He further stated that meningitis occurs commonly in young children under 5, those aged 17-25 who often live in close quarters like dormitories and barracks, and people over age 55 years.

“It is worth noting that the MenAfriVac meningitis vaccine was developed in India and clinical trials were conducted among children aged 1-29 years in The Gambia, Ghana, India , Mali and Senegal and the results have shown the vaccine to be safe and highly effective,” said Minister Sey.

According to the minister, over the years The Gambia has put in place an effective disease surveillance system which has helped to report 122 Neisseria meningitidis Group A, MenA cases, with 7 laboratory confirmed cases and 14 deaths during the period January 2012 to August 2013.

He added that The Gambia experienced a meningitis epidemic caused by the serotype W135 during 2012, and it is worth noting that The Gambia was the only country able to vaccinate all children aged 1 to 5 years including health personnel in the affected regions.

Over the years, the Government of The Gambia, in collaboration with partners, has been focusing resources and attention on the health sector, which resulted into the country consistently maintaining high immunization coverage of above nine percent of traditional vaccines, which is next to none in the sub-region.

The government also created a budget line within the Ministry of Health and Social Welfare for the procurement of vaccine and maintaining the cold chain system for the safe storage of vaccines at all levels in the country.

The minister further asserted that recently The Gambia was awarded The 2013 Resolve AWARD, at a ceremony held in Geneva, Switzerland, with the theme: Delivering on the Promise of Universal Access to Reproductive Health.

He said that immunizations have led to the eradication of smallpox, a 74 percent reduction in childhood deaths from measles over the past decade, and the near eradication of polio.

For her part, Josefa Marrato, UNICEF country representative to The Gambia, in a joint UNICEF/WHO statement, said in 2009, 14 African countries implemented enhanced surveillance and reported 88,199 suspected cases of meningitis, including 5,352 deaths.

According to her, this was the largest number of deaths reported since the epidemic occurred in 1996.

She noted that the impact of the ongoing government support has been the sharp reduction and, in some cases, elimination of some childhood vaccine preventable diseases. 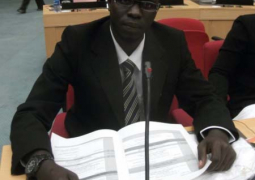