My employers beat me up, plaintiff

Muhammed Drammeh, who sued New Creation Foundation Gambia at the Kanifing Industrial Tribunal, yesterday told the tribunal that one Augustina Tawo and Rev. Tawo, employers at the foundation, beat him up when he requested his salary for the month of April 2014.

This revelation was made before Magistrate Jabang of the Kanifing Industrial Tribunal.

In his testimony, Muhammed Drammeh testified that he was a cleaner and was insulted by Augustina Tawo, who also asked him to leave her office when he requested for his salary.

He stated that Augustina Tawo followed him into Rev. Tawo’s office and slapped and spat on him.

He said Augustina Tawo and Rev. Tawo closed the door and both of them started beating him and then locked him in the office from 11 a.m. to 3 p.m., adding that there was blood oozing from his mouth.

Mr Drammeh narrated further that Augustina Tawo then called the Brusubi Police and told them Mr Drammeh fought them.

Mr Drammeh, the plaintiff, stated that the Brusubi Police told him to report there on 21 May 2014, to get his salary of April 2014, and gave him a paper to go to hospital because one of his teeth was broken by Rev Tawo.

The plaintiff added that on 14 May 2014, he went to Brusubi Police to request for a police report to take the matter to court and was paid his salary of April by the police at Brusubi, who told him that Rev. Tawo and Augustina Tawo denied beating him.

Mr Drammehadduced that the matter was reported to the Labour Department during which a tripartite meeting was held and the defendants were told to pay the plaintiff benefits of his leave notice and salary deduction but to no avail.

Further testifying, Mr Drammeh revealed that Rev. Tawo strangled him and then Augustina Tawo pulled his legs and he fell down, adding that Rev. Tawo threatened him that he would throw him out of the window.

He said he was never given an appointment letter after he served probation of two weeks as promised. He was represented by Garba Cham.

The case was adjourned till 24 July 2014, for cross-examination.

Muhammed Drammeh is claiming D1,077 being 14 days leave, the recovery of D13,464 being salary deduction, recovery of D12,000 beingdamages and compensation for unlawful termination. 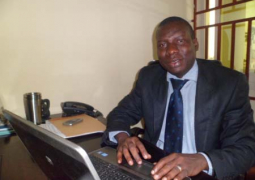