The chamber announced at a press conference yesterday that its forthcoming annual awards night and gala dinner will be purely dedicated to raising funds to address the plight of farmers and stand with them in solidarity during this period.

The government last month appealed for food aid, after it said that 70 percent of crops in the country failed during the past farming season, extending the reach of a food crisis already hitting millions of people across Africa’s strip.

Though a statement from the Ministry of Agriculture did not give a figure for the number of people needing food aid in the country, reliable official sources said a total of one million, thirty-five thousand people (out of the 1.7 million population) are in need.

“We as a business community deem it necessary to participate in this process of helping farmers and also contribute to efforts by government; as a result, part of theproceeds for this year’s event will be dedicated to the farmers,” Almamy Fanding Taal, Chief Executive Officer of the Gambia Chamber of Commerce and Industry, told journalists at the press conference.

To be held under the theme: “Standing by Gambian Farmers”, the annual business dinner, which attracts members of the business community, also provides them the avenue to interact, and draw public attention to the role of the private sector, while highlighting innovativeness and the spirit of entrepreneurship.

“This year, we want to hold the event as an act of solidarity with Gambian farmers,” he said, adding that everyone is aware of the difficulties and challenges that the farming community is facing, and the many efforts being made by the government to tackle the situation.

According to , the GCCI believes that farmers are the first pillar in building a vibrant private enterprise because, as he put it, when it comes to production, it is the farmers who really have trust in God to put their seeds in the soil.

Announcing that this year’s event is slated for 1st June 2012 at the Coco Ocean Resort and Spa, noted that The Gambia is an agriculture-based economy, and it continues to provide lots of inputs to other businesses.

“The GCCI is currently working on plans to engage its members to help communities that are in difficulties in various ways so that before the rainy season and the next harvest, we will do whatever we can to help our farmers,” he added.

spoke of this difficult time for farmers and for the country, while imploring the community to turn out in their large numbers to patronize the event, as the proceeds will be given to the farmers through the government.

also revealed that the categories for the various awards will remain the same, but some areas like tourism, insurance and restaurant service will be included in the category of awards for this year in order to create excellence and competition among the players in the private sector.

He noted that the dinner is to recognize the efforts of the business community, as well as rewarding excellence, adding that this year’s Business Award will be special because farmers’ plight is at the center.

Expressing their commitment in building a cohesive society, called on the businesses that are yet to register with the chamber to come forward.

Sarata Conateh, manager of Business Development and Research at GCCI said the chamber is proud to complement the government’s efforts, especially with the food crisis, noting that the significance of farmers towards the development of the country cannot be overemphasized.

Beatrice A Prom, manager of Corporate Services at GCCI is of the view that this was a good time for other members to join in this important crusade, to help farmers and achieve the goal of the new initiative. 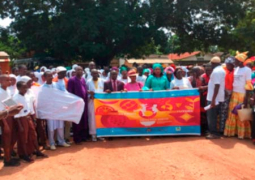