Dr Oliver Mboge, president of Musicians Union of the Gambia (MUSIGAM), has said Gambia musicians need a vibrant music union that can defend their rights and interest to improve their livelihood.

“Though the structure is available they lack institutional support to operate effectively, consideringtheir demand and mandate,” he said at a two-day training of 20 Gambian musicians on ‘human rights and democracy’ on 30 and 31 December 2013 organised by MandingMorry Foundation for Performing Arts (MANFOPA).

The two-day training for 20 musicians on human rights and democracy on the theme: “Promoting Social Justice through music” funded by the American Embassy, was held at the Alliance Francaise conference hall on Kairaba Avenue.

He lamented that they have a secretariat without staff and resources, which makes it difficult to carry out day-to-day routine work.

“Copyright and intellectual property are not abstract concepts; they help musicians make ends meet but lifelong learning and career transition support for musicians are inadequate and social security and pensions are as big a concern for musicians as for any other worker,” he said.

He describes the training as not only to educate musicians on human rights and democracy but also to deal with issues affecting the life and status of musicians in all areas of their lives.

Dr Mboge said:“Musicians working live and professional concerts are increasingly global in their nature, encouraging the creation of platforms and forums like the MandingMorry Foundation for Performing Arts (MANFOPA) initiative as it will help artistes work towards establishing international standards, drafting norms and model collective agreements designed to protect musicians wherever they may work.”

He expressed hope that the union would achieve its objectives with the support of the Ministry of Tourism and Culture, the National Centre for Arts and Culture and the enabling environment that government continues to provide.

Richard T. Yoneoka, United States Embassy Charge d’Affaire, said this new initiative by the MandingMorry Foundation for Performing Arts is funded by a grant from the US Embassy to empower musicians and professionals in the performing arts sector to raise people’s awareness of social issues, democracy, and human rights.

According to him, the project was one of five grants competitively awarded by the US Embassy this year under the democracy and human rights fund, noting that these grants are designed to protect political and religious freedom, the international human rights of women, persons with disabilities, LGBT persons, and other vulnerable minorities.

He said that using other mechanisms of communication in the form of entertainment creates significant impact in lives of people by informing and creating awareness about issues affecting them at all levels.

He added: “Our engagement is not limited to the class; we want to engage all strata of Gambian society, and this project represents an extraordinary opportunity.”

He assured them that his Embassy would continue to support activities that are geared towards the promotion of democracy and human rights and they are committed to using their leverage and resources to help promote The Gambia’s development.

Ibrahim Ceesay, executive director of MANFOPA, explained that the foundation was formed in 2010 as an arts-based organisation after realising there are many organisations working for different issues such as child rights, and none to serve the interest of the artistes.

According to him, the project aims at promotion of democracy and human rights through the creative arts sector to build the capacity of individuals in the performing arts field in The Gambia by using creative means to raise awareness on social issues, democracy, and human rights.

The project, he explained, is a vibrant, dynamic, and sustainable creative civil society engaged in the arts, and in a manner that contributes to the development of human rights and democracy and the eradication of poverty.

“The training is meant to equip the artistes’ education to be able to write their own songs, as well as to use in their studios in society as music serves as a message-sending tunnel,” he said. 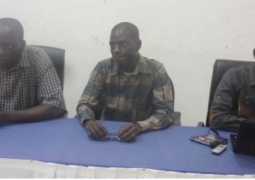 GPU trains armed and security agencies on freedom of expression