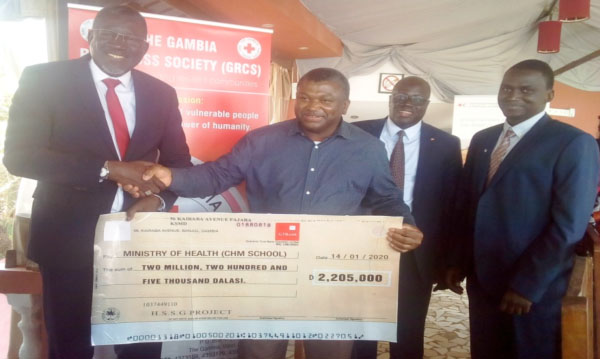 The International Federation of Red Cross and Red Crescent Societies (IFRC) on Tuesday signed a Status Agreement with the government of The Gambia through the Ministry of Foreign Affairs.

The agreement was signed by Elhadj As Sey, secretary general of IFRC who was in The Gambia on a two-day working visit.

While briefing members of the media on the objectives and benefits of the agreement, The Gambia Red Cross Society (GRCS) SolHEALTH and UB-ONE also handed over a cheque of two million, two hundred and five thousand dalasis to the Ministry of Health for the sponsorship of 45 Community Health Nursing Students enrolled at the Community Health Nurse School in Mansakonko and the renovation of the school facility.

In receiving the cheque at Ngala Lodge, Dr. Ahmadou Lamin Samateh, the minister of Health, said the health sector inherited difficult situations but was quick to add that they couldn’t keep on ruing the past and thus need to get together to build for the future.

He described health as an important sector for nation building, noting that without health people cannot do other things.

“You can have best of equipment but if you do not have the right people with the capacity then the equipment become useless,” he posited and therefore expressed delight with the sponsorship.

According to him, patients present themselves to them very late at health facilities – something he described as a challenge. The effect of training community health nurses will be felt in communities, secondary and even tertiary levels, he said.

He assured that the funds will be put to good use, saying presently at the Ministry of Health, there is accountability and good governance.

Alasan Senghore, secretary general Gambia Red Cross Society, explained that GRCS is a humanitarian based organisation enacted by an Act of Parliament in 1966 to prevent and alleviate human suffering where ever it may be found.

SG Senghore added that the Red Cross acts as auxiliary to public authorities in the humanitarian and development fields and is involved in a range of activities such as Disaster Risk Reduction and Relief, First Aid Services, Health Livelihood, Promotion of International Humanitarian Law, Youth and Children Empowerment, Gender and Diversity among others.

Jatto Sillah, president, Gambia Red Cross Society thanked all their partners for their support, saying they are implementing a lot of projects and hope the fruitful cooperation with the partners will continue.

He pointed out that a lot of people consider Red Cross as emergency responders but said “we are more than that.” According to him, Red Cross is willing to go to the last door to help when it is hard.

Elhadj As Sy, secretary general of International Federation of Red Cross and Red Crescent Societies, said the status agreement is to provide humanitarian assistance to people in need.

He said they are not any better than the people they serve but are just more privileged. He reiterated their commitment to continue with The Gambia Red Cross and Gambia government.

According to him, humanitarianism is a journey that will never stop as long as “we are united.” He described community nursing as very important and has to continue. 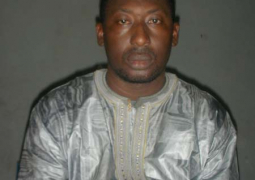