Eku Grant and Ebou Lowe were charged with murder, after they allegedly beat one Cherno Alieu Suwareh, alias Che Boy, leading to his death, during a search of his house for cannabis.

Pa Modou Njie, a driver with the NDEA, testified as the third prosecution witness and told the court that they went on a raid at Bakau Sanchaba, on 25th March 2011, together with the two accused persons.

He said when the officers were conducting a search in the house, he heard a quarrel and later saw the two accused persons coming out, and the 2nd accused was telling the 1st accused to stop the beating.

He further told him that the authorities at the NDEA have warned officers to stop beating suspects, adding that the deceased was then arrested and handcuffed.

He also said he saw blood on the forehead of the deceased person, when the deceased was asked to climb the vehicle, but could not climb, adding that the 1st accused threw him in the vehicle, and they left for the NDEA office in , and he later went home. 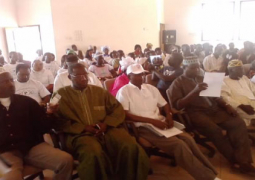