Conscious of the fact that a defeat against KGI will dash their chances of topping the league they outplayed and outclassed KGI and managed to score two solid goals to bag the maximum points.

KGI fought back for an equaliser and managed to score one goal, which eventually proved to be a consolation for the Bakau-based outfit.

The victory has earn has Bombada United maximum 6 points in two game. 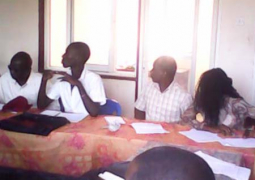