Testifying as the fourth prosecution witness, Ibrahim Bun Sanneh told the court that he was the executive director of the National Drugs Enforcement Agency (NDEA) and that he knew the accused persons as personnel of the National Intelligence Agency (NIA), and also knew each of them by their names.

He said he knew one Lamin Karbou is one of the personnel at the National Drug Enforcement Agency (NDEA).

He said that, in May 2009, coming from work as Director General, he received a call from former commissioner of Operations, Ousman Sanneh alias “Sembi” that some NDEA officers were seriously beaten by the accused persons in Brikama, West Coast Region.

“I instantly called the then Director of the National Intelligence Agency (NIA) Bo Badjie to inform him about it, but he told me he was not aware of such, but promised to find out, which he did,” Bun told the court.

“In the evening, Bo Badjie called and informed me that it was a true story, and that it related to drug trafficking at

Kembujeh Brikama Highway
, in the West Coast Region, but the situation is under control,” Bun added.

“I cautioned Bo Badjie on the phone, that why we were not informed since we are the agency responsible for the fight of drugs-related matters. I told him that ‘your officers caused the problem’, and he Bo Badjie told me that he wanted to see my officers,” he explained.

The former NDEA boss asserted that, on the following day, when Lamin Sima and Lamin Kabou reported to work, he personally took them to the NIA and handed them over to Bo Badjie, as Director.

“Upon my return to my office, I summoned a meeting for all area commanders to meet in my office to inform them what has happened at Brikama,” Bun testified.

He added that while in this meeting, he heard a big noise and he saw Lamin Kabou coming inside the office naked and bleeding with blood all over his back, and he fell down on the floor.

Still testifying, he told the court that, a few minutes later, they saw Alagie Edrissa Jobe forcefully enter his office, and his men wanted to arrest him, but he said ‘no let’s allow him to explain his mission first’.

Edrissa Jobe then said he was following his prisoner, who escaped from their custody. “I told him ‘you did this to my officer without any reason’. Edrissa Jobe told me that he did it, and that he had not regretted the act,” Bun continued.

“I called the Director again Bo Badjie to express my disappointment in the way the NIA dealt with my officers. I further told him that if it was for drug trafficking, they should charge them than severely beating them,” he told the court.

He added that, a few minutes later, he saw Ebrima Drammeh enter his office and found him talking with their boss about his disappointment, but Edrissa Jobe was still insistent that he would go with Lamin Kabou to the NIA.

“At that juncture, Ebrima Drammeh asked Edrissa to stop, since the two Directors are talking about the issue, ‘so let have respect and listen to them for their final resolution’,” he further stated.

“I personally left for the NIA main office. I found Ousman Sanneh, former commissioner of operations, who informed me that ‘the NIA tortured our officers, but they did not have any grounds to torture them,’ ” Bun told the court.

Bun said he later informed the then Inspector General of Police, Ensa Badjie, about the incident, who later went with him to the NIA headquarters to see his officers.

He said upon their arrival at the NIA headquarters, they called Bo Badjie who later directed them to his deputy, Hydara, and the office of Inspector General of Police being the overall head of security units under Interior, I did write to the minister to inform him about what NIA officers did to the NDEA officers.

The case at that juncture was adjourned till 18 July 2011, for cross-examination. 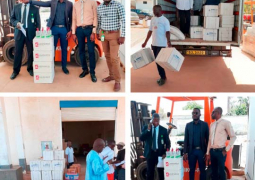 Stop Step Pharmacy donates D6M worth of medicaments to MOH