As the Tax Commission continues its enquiry into the payment of capital gains tax, more witnesses have appeared before it to give evidence.

The commission is also mandated, among other things, to ascertain the extent of loss of public revenue resulting from non-payment of capital gains tax, personal income tax and sales tax; and to determine the role of individuals, groups and professional bodies in the evasion and avoidance of tax.

Sheriff Marie Tambedou, a legal practitioner, told the commission that he bought a property on 16 December 1997, from one Baba Abu Khan for D10,000 but he did not have the lease document with him at the time of the purchase.

He added that it was a swampy area, as a result of which after buying the land he sold it to one Musa Joof, adding that he has the photocopy of the assessment and had paid capital gains tax.

He further said the record of transaction was available with him, and the copy of the deed should be at the GRA.

He then tendered the sketched plan of the land.

Omar Njie, also a private legal practitioner, told the court that he bought the property from his brother, Amadou Njie, in 2009 at Kololi, for D250,000.

He then tendered the lease document of the land, adding that the plot of land he bought forms part of the land they jointly owned.

He also tendered the photocopy of his capital gains tax receipt, and the notice of assessment stating that the land was just fenced.

Remy Jagne, a resident of Kanifing layout, told the commission that on 30 July 2010, the property, which was located at Kerr Serign, came under her care, but she did not buy it.

She added that she gave D2 million plus to one Neneh Jallow in the form of a loan, but the loan was still not repaid, and that the documents were with her as collateral.

She revealed that whenever the loan was paid, she would return the property to the owner, adding that the property was valued by the bank for D6.6 million.

Ms Jagne said the loan she gave to Neneh Jallow was an overdraft for a period of one year, adding that the property was a three-story building.

Neneh Jallow told the commission that the property in Kerr Serign was purchased by her brother on her behalf, but she did not know the actual amount her brother bought it for.

She said she sent D150,000 adding that her documents are with Lawyer EE Chime, and she had paid capital gains tax.

Ahmed Tijan Jallow, a resident of Brusubi, stated that on 8 June 2010, he bought a plot of land close to Brusubi Roundabout for D500,000, from Breckwoldt Company Gambia Limited.

He then tendered receipts of payment of capital gains tax, and the notice of assessment.

The managing director of the company, Ebou Samba, told the commission that the land sold to Ahmed Tijan Jallow was acquired from the Social Security and Housing Finance Corporation in 1999, for D150,000.

He said they later fenced the three sides of it, adding that they paid capital gains tax of D100,000, after he was assessed on D400,000,  before tendering the receipts of payment of capital gains tax. 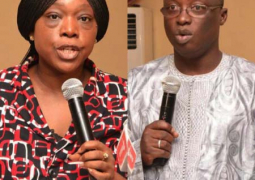