About 14 employees of the Gambia Groundnut Corporation (GGC) were on Monday 3rd May 2010 arraigned at the Banjul Magistrates' Court, charged with two counts of conspiracy to commit a felony and stealing.

The accused persons all pleaded not guilty to the charges preferred against them, and were subsequently granted court bail each in the sum of D500, 000, with two Gambian sureties, each of whom must have landed property within the Greater Banjul Area.

According to the particulars of offence, on count one the accused persons on 23rd April 2010, at the GGC and diverse places in The Gambia, conspired to steal 5750 kilograms of shelled FAQ groundnuts, valued at D89, 700, being the property of the GGC.

Count two stated that the accused persons, on 23rd April 2010, at GGC and diverse places in The Gambia jointly stole 5750 kilograms of shelled FAQ groundnuts, valued at D89, 700, being the property of the GGC.

When the case resumed last Thursday 6th May 2010, the prosecuting officer told the court that the prosecution wanted to proceed with the case, but the 4th and 10th accused persons were in custody, as they could not meet the bail conditions.

LK Mboge, the lead defence counsel, for the 2nd, 7th, 10th and 11th accused persons, told the court that the defence was applying for an adjournment. He added that he was just coming into the case, and wanted to be briefed by his clients.

Magistrate Emmanuel Nkea then adjourned the trial to May 17th 2010.

Praise be to Allah 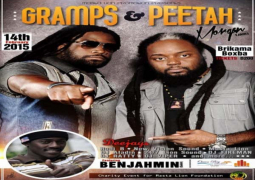 All set for Gramps & Peetah in Gambia for Charity Show