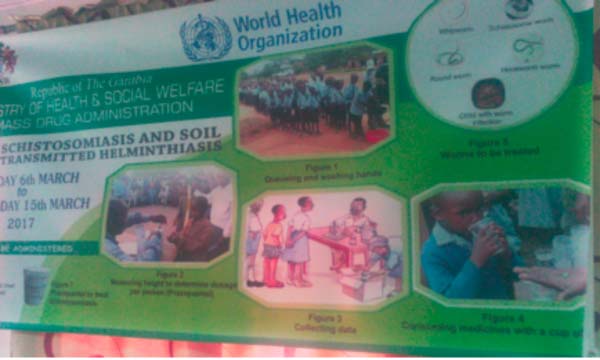 The Ministry of Health and Social Welfare in collaboration with the World Health Organization, WHO, have commenced a country-wide Mass Drug Administration Campaign on Neglected Tropical Diseases (NTD).

The mass drug administration campaign, according to health officials, would last for 10 days, targeting children from the age of 2 to 14 years, and would be conducted within 24 districts in the country.

In giving an overview of the campaign, Yahya Camara, NTD focal person, said the mass drug administration is an activity which is part of the initiative to control and eliminate neglected tropical diseases.

These diseases, he said, are two main types namely, ECNC disease and tropical neglected disease, adding that it is one of their intervention areas.

The purpose of the mass drug administration is to ensure that by the year 2020 they eliminate the two main targets, that is, Schistosomiasis and soil transmited helminthiasis.

Camara added that as a programme under the ministry of health and social welfare, the NTD programme has developed a master plan and an annual work plan, under which by the year 2020 they aspired to eliminate this disease.

According to Mr Camara, they are targeting 203, 000 individuals country-wide for both diseases, and 60, 000 people would be targeted for soil transminthiasis within two districts, while more than 134, 000 children for schistosomiasis within 22 districts, totaling 24 districts.

The director of Health Promotion and Education at the Health ministry, Modou Njai, said the purpose of the press briefing was to raise public awareness on the mass drug administration campaign, which kicked off yesterday.

According to him, during the campaign two drugs would be given to children age 2 to 14 years, and he urged parents to ensure that their children get access to the drugs.

The drugs, he noted, are crucial and the vaccination teams would be going into the schools and within the community.

He commended the Ministry of Basic and Secondary Education (MoBSE) for partnering with them, thus was optimistic such partnership would continue.

Speaking on behalf of WHO, Dr Sharmila Lareef Jah said the diseases have been multiplying in the population and reached a stage where the disease could no longer be neglected.

The WHO representative added that the drugs that they are going to give out to the children during the 10 days campaign are safe, as the drugs were sampled before giving them out, and they have been using them in many countries.

Sanjally Trawally, deputy director of Health Promotion, and Iris Cassez from the Life Skills Education Unit under MoBSE, both dwelt on the signs and symptoms of the diseases.