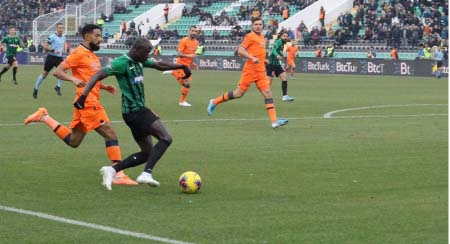 Gambian professional winger, Modou Barrow scored the only goal for his side (Deniszlispor) during their 1-1 draw at home against Istanbul Basaksehir in the week-fourteen fixture of the Turkish Super Lig, played at the Denizli Atatürk Stadyumu on Sunday.

The 27-year-old scored his side’s goal in the 60th minute through an assist from Malian Hadi Sacko, to cancel Edin Visca opener for Instanbul Basaksehir in the 54th minute.

The Scorpions’ attacker has now scored two goals and assisted two in fourteen appearances for his Turkish top flight team. He joined the Turkish Super Lig team on loan from Reading FC in England last summer.

The Gambian, has been the subject of interest from across Europe since last summer, and now links up with the newly promoted Turkish with the aim of helping the team to maintain their position in Super Lig.

The draw moved Modou Barrow and Denizlispor to 10th position on the table with 18 points, while Istanbul Basaksehir is in 4th position with 26 points after fourteen games.