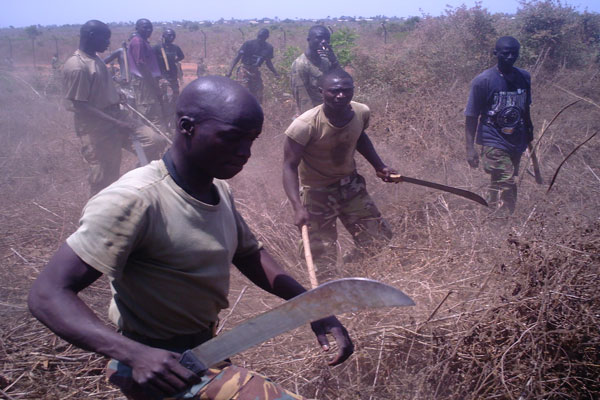 Soldiers at Yundum Military Barracks in collaboration with the Gambia Civil Aviation Authority officials last Monday embarked on a massive cleaning-up exercise at the .

Speaking in an exclusive interview with The Point, Mrs Ngoneh Mboob Jagne, Public Relation officer of the Gambia Civil Aviation Authority said the exercise is part of  ongoing efforts to mitigate bird hazard at the airport noting that as regulator and operator of Banjul International airport, the GCAA is mandated to make sure that the airport operates in a safe and secure environment.

Mrs. Jagne stated that GCAA has a clear responsibility to ensure that potential hazard is minimized by reducing the bird usage of the airfield to the lowest possible level.

She pointed out that the Neighbourhood has been sensitized for not setting illegal abattoirs, water pools and dumpsites adding that these are attractions for birds.

She noted that as part of the bird mitigation activities, on a daily basis, GCAA engages in the following: use of three bird-scaring devices located along the runway and sweep the runway before landing and take-off and the using of ambulances which introduces new sounds and flashing lights for operation.

Studies has shown that during the rainy season, the bird strikes level is high.

Bird strikes reports are a primary source of data for assessing bird hazard and their preferred environment is critical to the formation of effective strategies, the information on bird strikes is also fed into international Civil Aviation organizations ()

For his part Head of Air traffic control at the Banjul International Airport, Sulayman Jabang, said the army's intervention is timely noting that the Airport is faced with hazards and it is a worldwide phenomenon and control measures depend on the environment where the Airport is located adding that  control measures can be similar but different in certain aspects.

Mr Jabang said is located where there is vegetation which serves as a good habitat for birds and rodents adding that it is necessary to clear the area of the shrubs and grasses and also try to reduce the number of big trees but small ones continued to grow. As a result leveling of the area and control becomes a big challenge.

Mr Jabang finally concluded by saying it is a requirement that the runway strip is leveled and cleared of all obstacles not associated with aircraft Navigation.

Captain Essa Tamba, Second in Command of Yundum Army Barracks, said bird strikes is a concern to GCAA and therefore equally a concern for the Army, and that is why they wasted no time to answer to the call of GCAA.

Captain Tamba assured the GCAA official that his men will do everything possible to clear the area despite the fact that the airport is a huge area.

Catherine Nying, Director of Air operation described the cleaning-up exercise as successful because they are removing the trees and grasses adding that this was a long term measure brought forward by their new Director General and commended the Army for the good work. 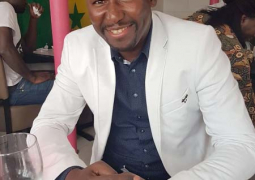