The Gambia Committee on Traditional Practices Affecting the Health of Women and Children (GAMCOTRAP)  recently concluded a series of Community Based training workshops in the Lower River Region. During recently concluded activities supported by Asturian NGO, ODAM ONGD reached out to more than three hundred and sixty Community and Women leaders in the Lower River Region of The . The six-day sensitization workshops were held at Pakaliba, Suntukung, Jappineh, Kwinella, Jirrof and Tankular villages. The activities targeted the six district chiefs of the Region, Alkalolu and women leaders. The opinion leaders including circumcisers and traditional birth attendants also participated in the training workshops.

The objective of the Training Information Campaigns was to sensitize the community and women leaders on the impact of Female Genital Mutilation, Women and Children's Rights, Gender Based Violence and to clear misconceptions that FGM is not an obligation in religion.Other issues discussed were early and forced marriages and teenage pregnancy.

On legal reform, participants are informed that The is one of the nine countries in that are yet to enact a law against FGM. They are informed about the efforts being made in the advocacy to have a law to protect women and girls from the practice as enshrined in Article 5 of the Africa Protocol on Women, which the has signed and ratified and need to domesticate into its national laws. Representing the Alkalo of Tankular, Fabakary Drammeh said The should not be isolated from global development efforts, in particular the campaign to ban FGM.

Speaking on Islam, FGM and Rights, Resource Person, Oustass Abubacarr Kanteh of Soma, informed participants about Pre-Islamic practices found in Madina and that FGM is not an obligation. He noted that Islam would not condone practices that are harmful to Muslims, especially women and children. He also reminded participants of their obligations towards their families.

Speaking at Pakaliba, a religious leader from Jalangbere, Kandeh Juwara noted what he heard from the workshop was in line with Islam and pledged his support to the campaign against FGM and he was optimistic that FGM will stop. He called on parents to take responsibility towards their girl children.

At Jarra Sutukung, Deputy Imam, Baba Kanagie told participants that after benefiting from GAMCOTRAP's training, he did further consultation and he had realized that the organization is on the right track. He also noted the reproductive health challenges women are faced withwhile calling on men to also give support to the campaign to end FGM.He said stopping FGM is benefit of humanity and that all of society should work together to stop the practice. He advised women to pay heed to the advice given to them during the training. He said it was his duty as a religious leader to inform his people.

Apart from the support of religious scholars in the Lower River Region, all the chiefs in the region declared their support to end FGM in the presence of their communities.

Among the issues raised was concern over the impregnating of school girls while those responsible go on earning their living. The appreciation of women as partners with men was acknowledged and to promote women's rights.

The outcomes of the trainings in Lower River Region included the consensus amongst participants to stop FGM, as well as the commitment to inform their communities about the knowledge gained. The chiefs, alkalolu and women leaders also pledged to take leadership responsibility to stop FGM in their communities.The other highlights of the trainings are the public declaration by some religious scholars to support the campaign. Such development is a manifestation that women have to read and gain knowledge to decide their own destiny and men would support them.

The Head Chief of Lower River Region, Seyfo Yaya Jarjusey of Jarra West, and his colleagues in Jarra and Kiang thanked the Alkalolu and women leaders for their positive response and good turnout to the programmes and urged them to take the message to their people. 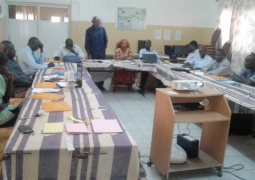