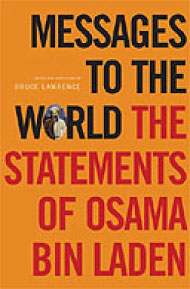 Edited and introduced by Bruce Lawrence
Review by NOAH FELDMAN

There is something obscene about reading the self-justifications of an acknowledged mass murderer. But what makes the collected speeches, interviews, Web postings and other public statements of Osama bin Laden different from, say, "Helter Skelter", is that bin Laden is not clinically mad. He gives reasons for his actions that, while morally outrageous and religiously irresponsible, could be accepted by otherwise logical people who shared his premises. This makes him more, not less, dangerous than the Charles Mansons among us. Bin Laden has an audience, of which he is acutely aware - a fact made particularly clear by his recent offer of a "truce" with America. His words, as much as his deeds, aim to convince others to embrace his view of the world and act accordingly.

Without words, in fact, bin Laden's violence could not achieve its stated goals. By his own account, Bin Laden is neither a nihilist nor a millenarian. He does not claim to embrace violence for its own sake or in the hope of hastening the apocalypse. Rather, he purports to fulfill the twin duties of calling nonbelievers to Islam and defending the Muslim community from attack.

The goal of jihad (presented by Bin Laden as a matter of self-defense) needs words because Bin Laden has no sizable army at his back. Unable to subjugate the West, Bin Laden thinks his best bet is to inflict harm - human and economic - and then blackmail his target. For Bin Laden, then, actual violence is instrumental. It is the interpretation of violence that is the very essence of his religious and political program. To hold his explanation in one's hands is to confront his reason for being.

"Messages to the World" is almost too well produced. Bound in an attractive orange wrapper and printed on excellent paper, it comes decorated with a thumbnail painting of the man himself, garbed in one of his allusive, carefully constructed outfits. The peaks of the Hindu Kush loom in the background, reminders of the Tora Bora debacle. James Howarth’s English translation is idiomatic and creditable. Bruce Lawrence's notes are occasionally idiosyncratic - why refute the claim that the United States created the AIDS virus but not the argument that "Rumsfeld, the butcher of Vietnam," is responsible for two million deaths? And Lawrence's introduction could have done without the puzzling comparison to Che Guevara. For the most part, though, the contextual explanations provided in the volume will be helpful to those uninitiated in the discourses of contemporary Islamic radicalism.

The real contribution of this book is what it tells us about Bin Laden's own development. Beginning as a trenchant critic of the Saudi government, he becomes an advocate of global religious war and the intentional killing of civilians, including women and children. This "progress" tells us something potentially useful about the path of radical Islamic ideology in recent years.

A product of his Saudi milieu, the young bin Laden recognized the moral authority of the religious scholars who enjoy quasi-official status in the kingdom as the people who legitimate the rule of the royal family. His first major public statement, made in 1994, when he was 37 years old and had been living in exile in Sudan for three years, took the form of an open letter to Sheik Abdelaziz bin Baz, then the Grand Mufti of Saudi Arabia, and a man widely considered to be both a religious conservative and a credible Islamic scholar. In the letter, Bin Laden addressed Bin Baz respectfully, urging him to retract fatwas that authorized the presence of foreign troops in the kingdom and validated the Oslo accords. Bin Laden presented himself not as a religious authority in his own right - in fact, he has no scholarly qualifications - but as a supporter of dissident Saudi religious scholars who had been silenced by the Saudi government.

By 1997, however, Bin Laden had begun to abandon this deferential stance and assume for himself the role (as he put it in an interview with the journalist Peter Arnett) of "enjoining what is right and forbidding what is wrong," since Islamic scholars seemed incapable of fulfilling this traditional duty themselves. He was on a course that would eventually lead to the conclusion that listening to scholars who err is "tantamount to worshiping them rather than God." From here it was but a short step to try to replace the scholars, offering his own interpretations of Islamic texts and traditions and presenting them as binding on believers.