Message to the youth

International Youth Day has just been celebrated on the theme: Youth Civic Engagement, a main goal of the United Nations System-Wide Action Plan on Youth (Youth-SWAP) that seeks to promote young people’s effective inclusive civic engagement at all levels.

In The Gambia, the celebrations took the form of a street procession, a symposium and other activities with call for the youth to embrace civic duties to be able to make meaningful contribution to the social, economic and political development of the nation as they assume the responsibility of steering the affairs of the country.

It is essential that the youth nurture the knowledge, skills, wisdom and understanding being imparted into them to be able to show themselves approved when they assume the mantle of squarely running the affairs of the state.

Under the current government in The Gambia, many opportunities to take advantage of have been put at the doorsteps of the youth.

The opportunity to study and develop themselves academically has been opened up to them through such avenues as the creation of higher learning institutions and skills training centres across the country, as well as scholarship programmes to further their education both at home and far afield.

While most youth are taking advantage of these opportunities to learn and acquire knowledge and skills, majority of them are applying “lackadaisical attitude to working hard and studying so as to prepare themselves for future responsibility. Instead they have embraced the culture of lamentation and dependency, which are enemies of self confidence.

Many have decided to go through the perils of the back-way to Europe in seeking greener pastures, and in the process a lot of them have lost their lives crossing the high seas to Italy and other countries in Europe.

Even some of those who have made it to Europe are undergoing harsh conditions with serious mistreatment in Europe.

They could, however, have some good reasons for leaving home to go through the back-way to Europe, which border in the region  of lack of jobs at home, economic hardship and intellectual poverty, to name a few.

However, with a little bit of consciousness and better understanding of the world, most of these youths trying their level best to reach Europe could as well use that resources and energy to develop themselves at home, and contribute meaningfully to the socio-economic development of their families and country.

A former president of Ghana, John A. Kufuor, once remarked: “I make a plea to the youth of … Africa. Your continent and its nations need your energy, your dynamism, your creatively and, above all, your dreams for the development of its component states.”

As we celebrate International Youth Day, it is very essential the youths realise that the streets of Europe are not paved with silver and gold, and should rather note that opportunities exist today in The Gambia more than ever before; hence now is the time to make hay while the sun shines.

“He who gathers crops in summer is a wise son, but he who sleeps during harvest is a disgraceful son.”
Proverbs 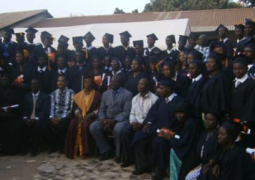