He denied the charge and was granted court bail of D50,000 with a Gambian surety.

The particulars of offence on count one stated that the accused, Yaya Barrow, on 21 February 2014, at Kassa Kunda, with intent to intimidate, threatened to kill one Dembo Barrow, thereby committed an offence.

Count two indicated that on the same date and place, he assaulted the said Dembo Barrow by beating him with a stick, thereby committed an offence. 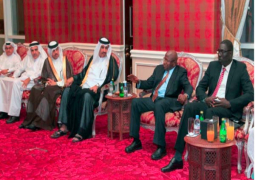