The Babylon case involving Lamin B. Jarju and 13 others recently proceeded before Principal Magistrate Dayoh M. Small Dago of the Brikama Magistrates’ Court, with the testimony of prosecution witness.

Testifying, Baboucarr Jammeh, a police officer, attached to New Yundum Police Station, told the court that on 20 February 2013, he received a complaint from one Francis Mendy (PW2) that his cashew orchard was set on fire and completely burnt down while some cashew trees were cut down.

Designated as the sixth prosecution witness (PW6), officer Jammeh said he went to the scene with a photographer and on arrival, he found out that some cashew trees were cut down and Lamin Jarju and Ba Saikou Ceesay were found at the scene with other people.

He said they asked him to forget about the issue, as the land belongs to their father, adding that he later invited the complainant to the New Yundum Police Station and obtained his statement.

Under cross-examination, defence counsel Borry Touray asked the witness when he joined the police and the witness replied that he did serve for 30 years.

When counsel also asked him to name the investigating police officer (IPO) in the case, he said the IPO was ASP Baldeh, adding that a report was prepared by the IPO.

He said he was the one who took the complaint and that every police station has a diary of action, saying the diary of action records every single step taken by the police in a matter.

The defence counsel applied to tender the said diary of action as evidence and it was admitted and marked as exhibit.

Counsel read out the content of the diary of action and then asked the witness if that was not his statement, and the witness responded in the affirmative.

The defence counsel pointed out that what the document stated was different from what the witness stated on 8 March 2013, but the witness informed the court that he went to the place twice.

He was then asked by counsel to look at the document and to tell the court when he first visited the scene, but the witness replied that it was not recorded on the document.

The defence counsel then applied for the witness’ statement that was tendered earlier in court, and he asked the witness when he gave statement at the station, but the witness said he could not remember, as it was a long time.

He was asked to look at the names of the accused persons in the diary action and to tell the court how many of them were there, and the witness replied that they were six of them.

Counsel put it to him that the diary of action was a fabricated one because his evidence showed that they were only six while the number was more than the six mentioned, but the witness replied that some of them were at large.

The witness said he received the complaint on 20 February 2013 and visited the scene the same day.

Counsel then applied to tender the said case file and the cover containing minutes as evidence in court, which was admitted and marked as exhibit.

Counsel also applied to tender the statement and was admitted and marked as exhibit.

The witness said Francis Mendy was the complainant in the case, adding that the scene was visited before the statement was obtained and he also took pictures of the place. 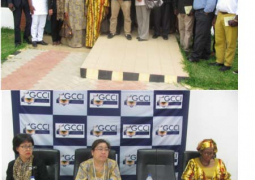