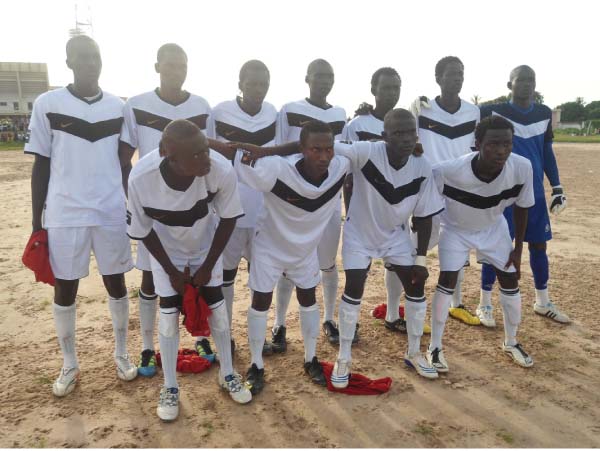 High-flying side Magadan on 6 October 2013 defeated Capital FM 1-0 in a game of the ongoing Bakau summer biggest jamboree called Nawettan played at the Bakau Mini Stadium.

Magadan were the better side in the first period, creating numerous goal-scoring opportunities against their opponents Capital FM.

Magadan opened the tally through midfield general Modou Lamin Sanyang in the 35th minute of the game to give his side the lead, which eventually proved to be the winner for Magadan.

Capital FM responded back but could not break through Magadan defence thus the game ended 1-0 in favour of Magadan, who are on the verge of sealing a place in the second round.

Elsewhere, reigning league and Super Cup runners-up Jamesen were held to a 2-2 draw by G. Unit in the 2013-2014 Banjul Nawettan game played at the Banjul KG5 Mini Stadium at the weekend.

The Banjul Sports Committee has yet again issued a notice as follows:

8.1.1At the end of the rounds, the top four (4) teams in each group shall qualify for the 2nd rounds;

8.1.2 The teams shall play in the following:

Group A Vs Group C

Group B Vs Group D

8.1.3The 1st and 2nd place teams will have a bye for the 1st round of the knockout competition;

8.1.5All yellow cards will be wiped out (amnesty) at the semi-final stage for all players but players with red card or under suspension will serve their suspension accordingly;

The registration for extra 5 players is open with effect from Thursday, 11 October after the end of the 1st round. It will close on Sunday, 20 October. The fee is D50 for each player registered.

The head coach of Makann Bi, Keller Kabir, is suspended from the bench for two (2) consecutive matches for being sent off the bench by the Match Official during their match against All Stars on Tuesday, 1 October 2013. He should not be on the bench, behind the bench or enter the dressing room.

The team is fined D500 as a result of Muhammed Bobb’s celebration on the perimeter fence after scoring the second goal against Macdonald United on Sunday, 6 October 2013. The fine is payable before their next match. Also, George Sarr is suspended for 2 matches after being sent off the bench by the Match Official during their match against Macdonald United on Sunday, 6 October 2013. He should not be on the bench, behind the bench or enter the dressing room.