The Point has learnt through competent sources that Pullo Joof, former regional disaster management coordinator for North Bank Region, has been appointed as the acting-executive director of the National Disaster Management Agency (NDMA).

A native of Kerr Ardo village in the Lower Baddibou district of the North Bank Region, Joof replaces Essa Khan, former executive director of the NDMA, who was removed sometime in July this year.

Mr Joof, a qualified teacher from the Gambia College, taught in many schools across the country prior to joining the NDMA.

He did his Primary Teachers Certificate at the Gambia College from 1997 to 1999, from where he proceeded to teach as a primary school teacher.

He enrolled at the University of the Gambia from 2000 to 2004, where he did a double major in biology and agriculture.

After graduating from the UTG, he taught at Essau Senior Secondary School for one year. He also worked at Njawara skills training center from 2005 to 2009. Prior to his appointment, Joof served as regional disaster management coordinator for North Bank Region. 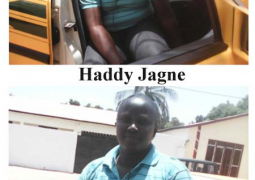