Medina FC on Sunday hammered One Love FC 3-0 in a keenly-contested encounter to advance to the round of sixteen in the ongoing Serrekunda East Sports Development Organisation (SESDO) Knockout competition.

Jerreh Sanyang gave Medina FC the lead in the 16th minute of the game from a penalty spot when Lamarana Jallow brought down Bunang Sanneh inside One Love’s eighteen-yard box.

Sanna Jabang made it 2-0 for Medina in the 37th minute of the game after beating two defenders and the goalkeeper with brilliant individual skills.

Earlier on the same day in the 3pm kickoff, Milan Rossoneri FC beat Hannover FC 4-3 on post-match penalty kicks following a 1-all draw in regulation time to also secure their place in the last sixteen of the knockout competition.

S. V. Laar FC have also made it to the last sixteen of the competition after overcoming Leeds United on penalty kicks by 6-5 after also drawing 1-1 in regulation time in their encounter.

Ebou Sanyang alias Torres had put S. V. Laar FC ahead in the 26th minute of the game but Sulayman Ceesay levelled the score for Leeds United three minutes later from a superb free kick sending goalkeeper Bakary Manneh in the wrong direction.

Speaking to reporters shortly after his side’s 3-nil win over One Love FC, Ansumana Jallow, head coach of Medina FC, said he was delighted at the way his boys played, adding that they performed to expectations.

He stated that his team was playing up to standard in the league but were just unlucky to be knocked out of the competition in the group stage.

“We were more tactically disciplined than One Love FC despite their big-name players,” he remarked, saying they would fight to win the knockout trophy since they have been eliminated from the league competition. 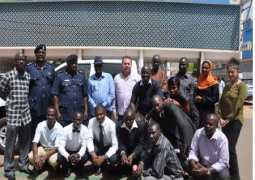