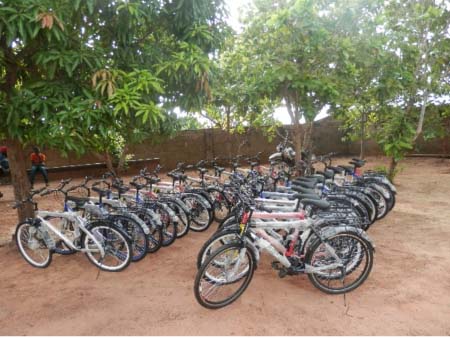 In an interview with The Point newspaper during the weekend, Edi Bah, manager of the federation, said the beneficiaries of the bicycle were drawn from all the six community associations that constitute Eastern Foni Federation.

“The bicycles are meant for those school children who travel long distances on foot to get to their school,” he said.“With these bicycles, the beneficiary students will be in school on time, thus improve their academic performances in class.”

Abdoulie Trawally, a parent, in his vote of thanks, said the gesture came at a time when there was high demand for it.

He said most of the parents could not help seeing their children trekking a far distance to attend school but they not also afford to buy a bicycle.

Officials of Eastern Foni Federation reiterated that the federation is in the service of needy children but urged parents of students who received the bicycle to properly manage it for longevity.

Similarly, the federation has also distributed more than 190 mosquito nets for pregnant women and children under 5 years as part of its commitment to the protection of children from pregnancy to adulthood.

The Kampassa Community Clinic has benefited from the nets and it also has its water facility and Early Childhood Development Centre refurbished and upgraded by the federation.

For the past years, the federation has been engaged in providing support and rendering humanitarian services to needy children, youth and their families in the districts of Foni.

Eastern Foni Federation’s support is mainly in the area of provision of teaching, learning and play materials to schools, health service, agriculture, youth empowerment, sport, forestry, water and sanitation materials, among other things.