Several institutions can justifiably lay claims to fuelling the transformation of 's status. But it is Gambia Postal Services Corporation (GAMPOST), much more than any other institution deserves to be credited for eminently successful in enhancing the postal services.

GAMPOST has over the years made positive progress as a result of policy reforms, which has surely improved its services and promote value-added activities and new services.

In 1984, the Government commissioned a study on the creation of an autonomous postal service. The outcome of the study showed that the time was not right for the postal service to change its status.

An update of the study was carried out in 2004 / 5 and as a result GAMPOST was created by an Act of Parliament in December 2005.

January to June 2006 was a transition period for new entity. In July of the same year, a Board of Directors was constituted.
"We have launched a Web site to provide our customers and partners around the world with improved services. We have also developed a database along with an online inquiries handling system to facilitate the handling of inquiries about mail and packages we process.
"As we go forward into the new millennium, you can count on us to redouble our efforts to provide you even better and greater variety of products and services," where the words of GAMPOST dedicated and enterprising Managing Director, Mr. Momodou Ceesay.

With Mr. Momodou Ceesay at the helm of affairs, it is already reflecting the outstanding pedigree of international standards.

GAMPOST also provides some financial services such as saving accounts, the sale and encashing of postal orders, domestic money transfer and western union (payment only).

Postal customers can open and operate a savings bank account at any of their branches, and under the following terms:

Minimum amount to open an account is D100.00
Interest rate is 7.00% per annum.
A maximum of four withdrawals is allowed per month.
There are no restrictions on number of deposits that can be made per month.
A fee of D100 is charged for closing an account.

Thus, the GAMPOST savings accounts not only have attractive terms and conditions, they are also backed by the solid reputation of a public institution with a long history of service.

The GAMPOST also sells and encashes British Postal Orders. Postal Orders are a safe and trusted way to send money, and can be exchanged throughout the  Commonwealth.

*           The cheapest and most confidential way to send and receive money

He said GAMPOST offers a variety of mail services, mainly in the delivery of letters, packets, and parcels.

In addition to mail services, the GAMPOST provides post-postage services that allow various organizations, businesses to post their mail on credit, and be billed each month for their total postage charges. This service not only saves participating organizations and companies a lot of energy and effort, but it also provides valuable means of saving money.

Mr. Ceesay added that GAMPOST also provides courier service in partnership with other postal administrations.
The GAMPOST is a government agency, under the Department of State for Communications, Information and Information Technology (DOSCIT).

Mr. Ceesay said that GAMPOST range of services and facilities has been upgraded to meet international standards and more importantly exceed your expectations.

He said GAMPOST has undertaken reforms in its processes and procedures to achieve the objectives of the county's vision.

Mr, Ceesay, commonly known as MB, is one the persons behind GAMPOST's on-going development drive. He joined the postal services in 1975. In 1979 he left the country to further his education in the . In 1984 he returned home and went back to postal services, and from then, unless he was briefly posted to the Ministry of Works and Communication as Deputy Permanent Secretary Works with Postal Services.

He was recalled to the postal services in July 2000.

Pastor Terry Jones of the USA is back in the news, announced by the BBC as a ban is being considered for an entry in UK 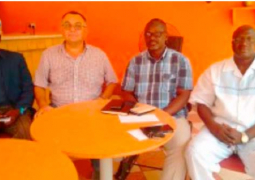