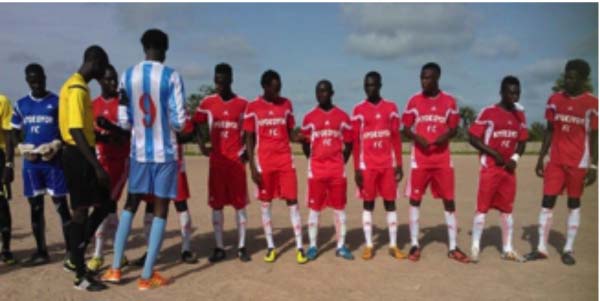 After serving one suspension for invading the pitch

Nyokoyorr have grabbed their first victory in the 2015-2016 Gunjur Nawettan after serving one suspension for invading Gunjur Nyamina Football pitch in the 2012-2013 Nawettan season.

The victory has earned Nyokoyorr top spot in group A with three points in one outing following their slender win over Gunjur Kajabang outfit in their group opener.

The defeat left Kajabang at the bottom in group A with zero point in one game after their hard-fought 1-0 defeat to Nyokoyorr in their group opener.

Kajabang need to win their remaining fixtures in order to fancy their chances of qualifying for the quarterfinals and also to avoid relegation and stay in the nawetan next season.

Great Oxford finished the game with ten men after combative midfielder Abdou Joof was sent off for unsporting behaviour.

Red Stars are now topping group B with maximum three points in one game following their 1-0 win over Great Oxford in their opening group tie.

Great Oxford are rooted at the bottom in group B with zero point in one match and are hoping to recover in their remaining games to boost their hopes of qualifying for the quarterfinal as well as avoid relegation and stay in the nawetan next season.