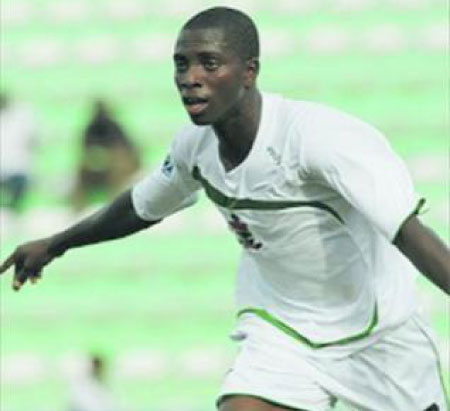 Lamin Sarjo Samateh has won the SJAG Player of the Year for the second time in the latest the Sports Journalists Association of The Gambia Award event on 2 July this year at the Jerma Beach Hotel in Kololi.

The Samger forward swept the contest from other contenders such as Buba Jallow (Melez) and Dawda Bah of HJK Helsinki in the final of the 2010 edition, after winning the 2009 award in last year’s show.

In 2010, Samateh scored 11 goals for Samger in the GFA Division One League Championship, which automatically booked him an entry into the SJAG list of short-listed nominees. His team finished third last season.

Samateh broke his way into the U-20 starting line-up in their 1-nil win over in that ensured ’s qualification for South Africa 2011 Championship.

Samateh’s achievement is not only limited to the club side, he was an integral part of The Gambia national U-17 team’s success as the Baby Scorpions underwent a successful Pepsi Academy Football Tournament, prior to The Gambia’s participation in the last World U-17 Youth Championship in Nigeria.

The goal hunter also won the Paradise FM player of the season.