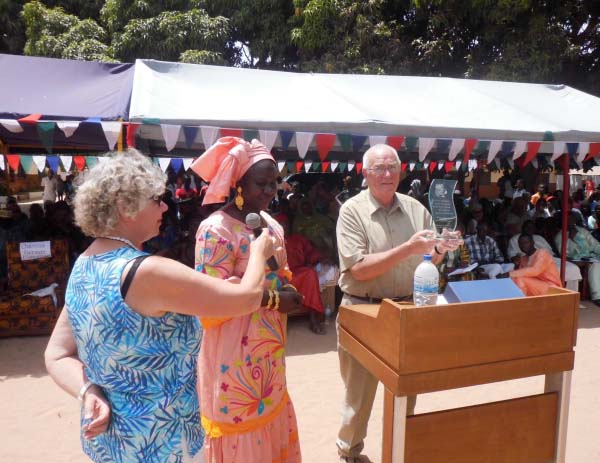 Kindergarten Wattenscheid is a charitable organisation founded by a German philanthropist in 1980.

The organisation provides social services to the community of Brikama Kabafita and neighbouring settlements by building school for children and creating employment for teachers and support staff.

Ma Ansu Demba, chairman of the Parent-Teachers’ Association of the nursery school, urged all to join hands for the betterment of the school and the community as a whole.

Hawa Sanneh, headmistress of the school, paid tribute to the founder of the organisation, the late Guenter Schmitter, and his friends, for their foresight in setting up the kindergarten.

“Their support and patronage provided an opportunity for many Gambian children to have access to education,” she said.

“From 1980 to date, more than 3,000 children have been taught in the school here, some of them are now handling senior positions in both government and private institutions,” she added.

The headmistress said the nursery currently has 450 pupils and 34 staff, making it one of the biggest nursery schools in the region.

She pointed out that the school is proud of the collective and individual support of the ex-pupils to their alma mata.

Some of the ex-students are now doctors, bank managers, engineers, pilots and teachers, she said.

Mrs Sanneh explained that it was because of the success of kindergarten that many German sponsors were inspired to support the education of Gambian children by starting educational projects in more than seven communities in West Coast Region.

She explained that some of the sponsors are engaged not only in education but healthcare.

Kindergarten Wattenscheid, in 2006, opened a dental station for free dental care for all children.

In 2008 and 2009, the organisation in collaboration with the University of Witten Herdeke in Germany, conducted community oral health training for 21 participants working in various health facilities in across The Gambia.

In 2013, the organisation launched a sponsorship package to annually sponsor ten outstanding children after the final exams.

Gerhard Ruth, one of the main German sponsors, gave each pupil at the school uniforms, shoes and gifts to the teachers.

He said they are very much delighted and that the members of the trust fund would continue supporting the needy and deserving children in the areas of education, health, environment among others.

The guest speaker of the anniversary, Sanna B. Jarju, an ex-student of the nursery school and a final year student at Gambia university, said the school administration, sponsors and parents have all played an important part towards the development of the school.

He noted that many students who were one time enrolled at the nursery school are “all excelling today” in various sectors of The Gambia.

Fatou B. Jammeh, a teacher and an ex-pupil, in his vote of thanks, commended the German sponsors for being the driving force behind the school.

“Let me put on record our tribute to the founder of this school, the late Guenter Schmitter, for his guidance and encouragement,” she affirmed.