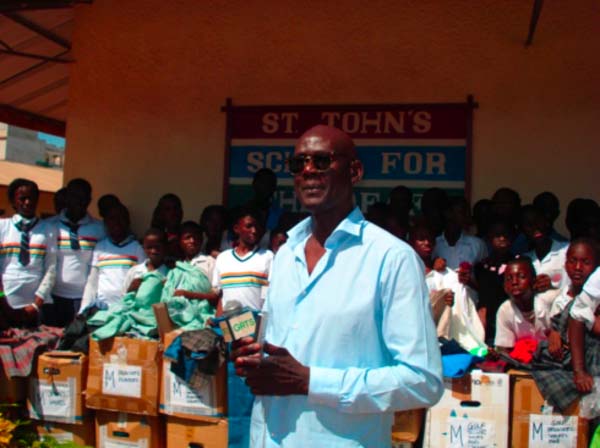 Thomas Cook in Northern Europe, in collaboration with J.Lindeberg, a Swedish clothing company, recently donated hospital equipment, learning materials, clothes among other goods worth millions of dalasi to hospitals and schools in The Gambia.

Among the beneficiaries were BAFROW Clinic, The Point Newspaper, Hart House (Home for Children with Learning difficulties) in Sinchu Alagie, St. John’s School for the Deaf in Kanifing among other schools within the Greater Banjul Area and West Coast Region.

Modou Jobe, an employee of Thomas Cook, who presented the materials to beneficiaries on behalf of the donors, said he felt proud as a Gambian representing Thomas Cook.

Thomas Cook has been operating in The Gambia for 35 years, Mr Jobe said, adding that this was the third time the airline had supported the Gambian community and would continue to be part of Gambia’s development, as they support Gambians.

As Gambians based overseas, they have an obligation to The Gambia, he remarked, saying it is always important they remember they are Gambians, as the Gambian Government paid their school fees.

“Whatever we have in Europe, Gambia will always be our Gambia,” stated Mr Jobe, who has been working for Thomas Cook for the past 30 years.

Daniel Mendy, Principal of St. John’s School for The Deaf, said they were really pleased about the gesture, adding that they “are very blessed” for chosen them to be among the recipients of the donated materials, as they are not the only kind of such a school in the country.

They look forward to seeing more of the gesture annually, he said, thanking Thomas Cook, J. Linderberg and Mr Jobe for their support.

Amadou Touray, Honorary President of the Parent Teacher’s Association of St. John’s School For The Deaf, described the donation as another milestone and described clothing as very important in the lives of everybody, and thanked the donors.

Aja Sira Singhateh, a representative of the Regional Director, said Principal and Vice Principal are working hard for the welfare of the school and children, thanking the donors for the gesture.

Fatou Waggeh, director of BAFROW Clinic, in receiving the materials, thanked Mr Jobe and Evo, who have been facilitating the shipment of materials for the clinic over the past six years.

The equipment and materials would help in sustaining the running of the clinic as some of the equipment donated could not be got in The Gambia, she said.

Madam Waggeh described BAFROW as one of the reasonable private clinics in the country, saying the gesture would go a long way in helping them meet some of the cost.

Geoff Hunwicks, CEO of Hart House, said the donated materials would help to maintain the high standards of dressing and bedding in the home, which has been operating in The Gambia for the past 12 years.

It would as well make the children look smart and at the same time make sleeping easy for them, he added.

Rohey Hunwicks Nee Jammeh, director of the centre, said the children at the centre are under the umbrella of special need, and therefore thanked Thomas Cook and J. Linderberg for considering them.

“We are here to make a difference in the lives of these poor innocent children who do not deserve being like this,” she said.